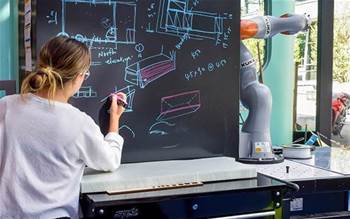 For robotic and additive manufacturing design.

The ProtoLAB workshop was designed by Melbourne’s H2o Architects to be a spectacle at the northern end of Swinburne’s Hawthorn campus, with a glass facade allowing passers-by see the robots in action.

The lab has three robots from Chinese bot-maker KUKA. Two are smaller machines for collaborative design work with humans, while a larger machine boasts a three-metre reach and sits on an eight-metre track to allow it to tackle bigger projects.

The Lab also features a high-speed HP Jet Fusion 3D printer, seven laser cutters, and a number of other automated platforms and tools.

Manager of Technical Services, Architecture and Design, Andrew Tarlinton, said the ProtoLAB equips students with the software tools to control the robots, while using data analytics to optimise their designs.

“Computer programs, and the students tethered to them are getting smarter, utilising parametric software to control not only a model’s shape but also the robot or machine attached,” Tarlinton said.

“Generative design and parametric design are not new ways of working, but we are progressively finding easier ways of producing designs, and communicating to the machines.”

“We also now have the space and large-scale robotics to undertake prototyping, fabrication and assembly at architectural scale,” she said.

There are also integrated learning and research spaces within ProtoLAB, meaning that time-consuming production process don’t get in the way of teaching.

Turlinton added that students and the general public passing the ProtoLAB often take the chance to check out the different stages of the design process.

“Children press their faces against the glass, mesmerised, watching something being machined out of a block of foam - as if to appear by magic.”