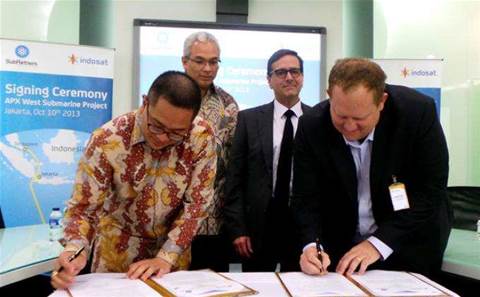 Bottleneck for all operators.

The company, founded by Bevan Slattery, last night signed a memorandum of understanding with Indosat, formalising discussions that have been underway since earlier this year.

In return for helping SubPartners gain the requisite Indonesian permits, Indosat will "be the sole Indonesian licensed carrier" on the APX-West cable, which is to run between Perth and Singapore.

"Under the terms of the MOU, Indosat will participate to build a branch connection from APX-West that will be landed at Indosat's landing station at Ancol, Jakarta," SubPartners said in a statement.

"Indosat will initially light capacity to Singapore, with future options for capacity to Perth."

Gaining permits from the Indonesian Government is seen as a major bottleneck for prospective submarine cable operators vying to light up capacity on the Perth-Singapore route.

One rival project to SubPartners' APX-West, the Australia-Singapore Cable, is running well behind schedule as it tries to sort out permits.

Another rival, Trident Subsea Cable, is aligned with Singapore's Matrix Networks, which already has permits to run subsea cables and branching units in Indonesian waters.

Indonesian red tape is also the reason why it took almost four months to repair the SEA-ME-WE3 cable that currently plies the Perth-Singapore subsea route. The cable was cut in January this year but not repaired until late April owing to difficulties getting approval for a repair ship to operate in Indonesian waters.

ISPs including Perth's iiNet are backing SubPartners to be the first to be able to bring competition to the Perth-Singapore subsea route.

iiNet told iTnews it expects substantial capacity price reductions on the route once APX-West — or any other operator — manages to bring diversity to the route.