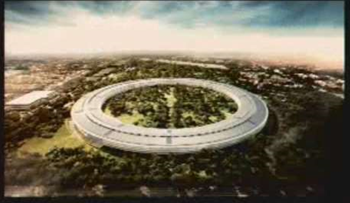 Apple boss Steve Jobs has unveiled his plans for enormous new headquarters in Cupertino, which he says will look a “little bit like a spaceship landed.”

Jobs made his case for the proposed 290,000 square meter facility to the Cupertino City Council on Tuesday after Apple's Worldwide Developer Conference.

The circular structure will be made from huge sheets of curved architectural glass similar to Apple's retail outlets.

“It’s a circle and curved all the way around. This is not the cheapest way to build something. There’s not a straight piece of glass in this building,” he explained.

Apple would use the knowledge it acquired from building its chain of retail outlets, said Jobs. “We know how to make the biggest pieces of glass in the world for architectural use.”

“I think we have a shot at building the best office building in the world.”

Apple had purchased the land which formerly was home to HP’s computer systems division. Jobs recounted that it was where he had landed his first summer job at age 13 after contacting Bill Hewlett for spare parts to build a frequency counter.

The site would augment Apple's existing campus on Infinity Loop and provide a central workplace for 12,000 staff. Apple's staff were currently scattered around Cupertino at "not very good" rental properties, said Jobs.

Four levels of parking will be built beneath the four story circular structure, which Jobs argued would enhance the landscape by removing 90 per cent of the existing parking space.

Apple would also reverse the typical energy set-up for the building by relying on “natural gas and other sources".

“I think we’re going to make the energy centre our primary source of power and use the grid as back up,” he said.

Jobs showed his flare for negotiating when asked by the council how the city would benefit.

“As you know, we’re the largest taxpayer in Cupertino, so we’d like to stay here. If we can’t, we’d have to go to some place like Mountain View and we’d take our current people with us," he said.

One member on the council panel asked if Apple would provide Wi-Fi to the city, but Jobs lobbed the question back to the city.

“I’m a simpleton. I’ve always had this view that we pay taxes and the city should do these things. That’s why we pay taxes. Now if we can get out of paying taxes, I’d be glad to put up Wi-Fi.”