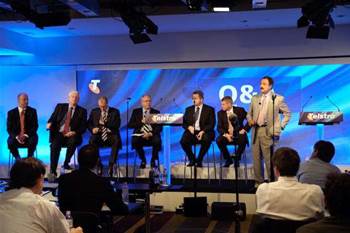 Telstra has announced that the last remaining American executive brought into the fold by departing CEO Sol Trujillo will fly home at the end of the financial year.

The carrier announced that its senior vice president of 'Transformation', Tom Lamming, will leave the company on June 30, the same day Sol Trujillo heads home to the United States.

Tom Lamming was Sol's 'hired gun' to lead Telstra's IT transformation, and was employed as CIO for the carrier from February 2007 to November 2008 before being replaced by current CIO John McInerney.

Telstra's IT transformation project, which is estimated to have cost the carrier some $11 billion to date, began in late 2005 and aimed to dramatically reduce the number of systems the telecoms giant has to support.

From the outset Telstra planned to shrink its operational systems from 1200 to 300 and its network systems from over 300 to just over 100.

To date, the company has decommissioned 400 legacy systems.

Lamming will leave the company with Telstra's IT transformation unfinished, but said the executives left behind to complete the mammoth project are up to the task.

"The team that is working on the IT transformation is world class and it has been a pleasure to work with them," Lamming said in a statement.  "I have every confidence that they will finish the job under the very capable leadership of [CIO] John McInerney."

Telstra, which last week appointed a long-time staffer David Thodey as CEO, has gradually purged the American executives brought on board under Trujillo's reign.

A spokesperson for Telstra said Lamming is the 'last American executive' hired by Sol Trujillo still employed by the carrier.