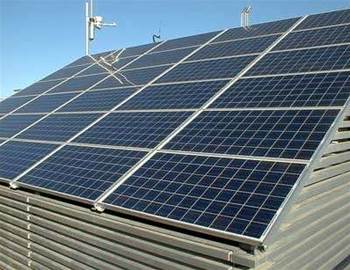 Implemented on 9 June, the system supports a small 60 square metre data centre containing HostAway's blade servers and equipment that runs software and applications for some 150 customers.

The data centre's small size was a boon for the project, said HostAway director Ashley Hadassin, who said the facility uses around 100kW per hour.

Fifty-four solar panels were installed for a total cost of $56,000 - $14,000 of which was defrayed by 331 Government-granted Renewable Energy Credits, he said.

"It would be a huge outlay for a larger organisation; a larger data centre would have an even greater power requirement," Hadassin told iTnews today.

"The benefits are clear, power represents a large portion of our operating expenses ... This is the first time I'm actually looking forward to receiving a bill," he said, expecting $400 savings on what was previously a $9,000 monthly electricity bill.

Perth electrical company A Womans Spark performed the installation between 5 and 6 June, enabling the solar panels in 15 minutes on 9 June, while the data centre ran on HostAway's backup generator.

Solar energy is fed into HostAway's power system prior to the back-up generator supply, to ensure that the power protection remains active in case of a mains outage.

Installers were also challenged with minimising shadows from antennae and air-conditioning units on HostAway's roof, so only two percent of output was lost to 'shadow pollution'.

An outdated, two-metre satellite dish on the roof was also dismantled.

Hadassin said it was unlikely for HostAway to increase its reliance on solar energy as it would take an estimated 200 solar panels to generate 50 percent of its power requirements, and the company currently does not have enough roof space for this.

However, the company has also looked into Vertical-axis Wind Turbines, and would consider installing these "if the Government introduces more incentives," Hadassin said.

The company expects up to an 18 percent increase in electricity prices in the next year, and is now focused on moving to a hot aisle, cold aisle configuration to improve the efficiency of cooling and reduce power consumption.