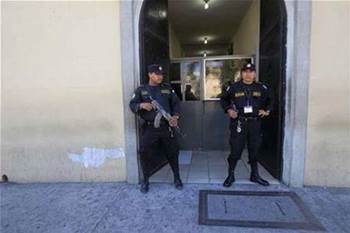 US officials say he is "subject to local laws".

US software guru John McAfee, fighting deportation from Guatemala to Belize to face questions about the slaying of a neighbor, said on Saturday he wants to return to the United States.

"My goal is to get back to America as soon as possible," McAfee, 67, said in a phone call to Reuters from the immigration facility where he is being held for illegally crossing the border to Guatemala with his 20-year-old girlfriend.

"I wish I could just pack my bags and go to Miami," McAfee said. "I don't think I fully understood the political situation. I'm an embarrassment to the Guatemalan government and I'm jeopardising their relationship with Belize."

The two neighbouring countries in Central America are locked in a decades-long territorial dispute and voters in 2013 will decide in a referendum how to proceed.

Responding to McAfee's remarks, a US State Department spokeswoman said US citizens in foreign countries are subject to local laws. Officials can only ensure they are "treated properly within this framework," she said.

On Wednesday, Guatemalan authorities arrested McAfee in a hotel in Guatemala City where he was holed up with his Belizean girlfriend.

The former Silicon Valley millionaire is wanted for questioning by Belizean authorities, who say he is a "person of interest" in the killing of fellow American Gregory Faull, McAfee's neighbor on the Caribbean island of Ambergris Caye.

The two had quarreled at times, including over McAfee's unruly dogs. Authorities in Belize say he is not a prime suspect in the investigation.

Guatemala rejected McAfee's request for asylum on Thursday. His lawyers then filed several appeals to block his deportation. They say it could take months to resolve the matter.

The software developer has been evading Belize authorities for nearly four weeks and has chronicled his life on the run in his blog, www.whoismcafee.com.

McAfee claims authorities will kill him if he turns himself in for questioning. He has denied any role in Faull's killing and said he is being persecuted by Belize's ruling party for refusing to pay some US$2 million in bribes.

After making millions with the anti-virus software bearing his name, McAfee later lost much of his fortune. For the past four years he has lived in semi-reclusion in Belize.

He started McAfee Associates in the late 1980s but left soon after taking it public. McAfee now has no relationship with the company, which was later sold to Intel.

Hours after his arrest, McAfee was rushed to a hospital for what his lawyer said were two mild heart attacks. Later he said the problem was stress. McAfee said he fainted after days of heavy smoking, poor eating and knocking his head against a wall.

He told Reuters he no longer has access to the Internet and has turned over the management of his blog to friends in Seattle, Washington. On Saturday, they began posting a series of files claiming to detail Belize's corruption.

Residents and neighbors in Belize have said the eccentric tech entrepreneur, who is covered in tribal tattoos and kept an entourage of bodyguards and young women on the island, had appeared unstable in recent months.

Police in April raided his property in Belize on suspicion he was running a lab to make illegal narcotics. There already was a case against him for possession of illegal firearms.

McAfee says the charges are an attempt to frame him.

"People are saying I'm paranoid and crazy but it's difficult for people to comprehend what has been happening to me," he said. "It's so unusual, so out of the mainstream."