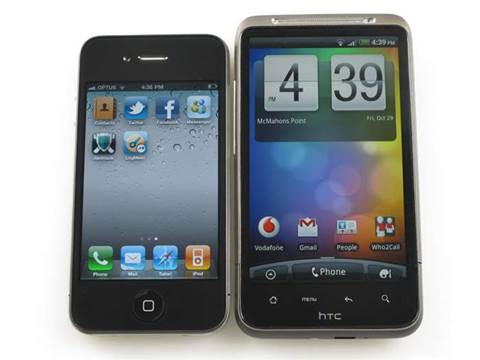 A survey of 1200 iTnews readers would suggest that Australia's technology leaders are gravitating towards iPhone and Android devices over Symbian, Windows and Blackberry smartphones.

The survey, which asked readers about their IT spending in the coming 12 months, also asked what smartphone operating system powered our readers' mobile devices.

Last year, 31 percent of readers didn't use what they would term a 'smartphone'. This year that number was down to 19 percent.

That's four out of five readers using their phones for web browsing, email and downloading of apps.

Not a lot of that growth is coming from Blackberry, Symbian and Windows. Users of Blackberrys and Symbian-based phones were up around one percent, whilst Palm OS just about fell off the chart altogether.

Windows Mobile also made a very poor showing, down from 16.7 percent of readers in 2009 to 10.1 percent this year. Microsoft would desperately be hoping that the recent launch of the Windows Mobile 7 OS will turn its smartphone fortunes around.

The stats showed that Android has truly come of age - from one percent of our readers using Android last year to six percent today. Again, watch the figures in 2011 with the release of devices like the Desire HD. I would be surprised if Android didn't hit double figures.

The biggest surprise in the iTnews office is the growth in iPhone users - from 18.1 percent of our readers in 2009 to 30 percent in 2010. That is almost precisely the same percentage increase of those that have adopted a smartphone for the first time.

There is no way to tell if the numbers correlate directly, but it could suggest that Apple has very effectively sold into the second wave of smartphone adopters.

Or perhaps the iPhone appeals to the new generation of IT industry workers connecting with iTnews for the first time.

What do you think?