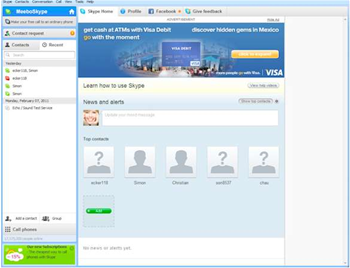 From this week, Skype users can expect to see and hear advertisements while using the free internet telephony client, the company announced on Monday.

Ads will appear in Skype's new "Home" tab, which will expand from a user's list of contacts. Windows users are set to be the first recipients.

Skype claims advertisers should reach around 145 million eyeballs a month or up to 29 million people at once, according to its December 2010 figures.

Skype sales will be done via partnerships, which have so far only been established in the US, UK and Germany. It did not clarify whether Australian users would see ads yet.

Whether users see it that way remains to be seen. Skype has faced a small number of complaints in the past for even advertising its own services, according to its forums.

“If you’re in the US, we don’t want to show you ads for a product that is only available in the UK,” Bewsher explained on Skype’s blog.

Users will be able to opt-out from sharing this information, said Bewsher.

"We look forward to leveraging Skype's new display advertising to connect Groupon to an even larger captive audience," he said.