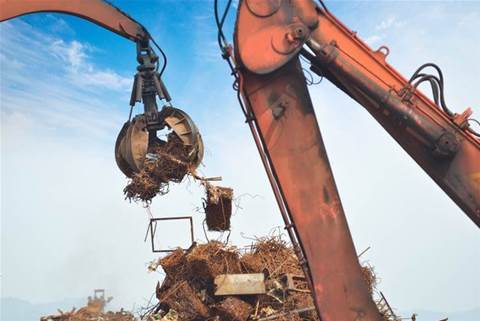 The cloud may have commoditised computing infrastructure, but at Sims Metal Management it’s dead data centres and recycled racks are the hot new play.

The world’s biggest digital rag-and-bone cart is pivoting its business to scrapping Infrastructure as a Service as pretty well everything – public, private or hybrid – heads to the cloud.

The ASX-listed global resource recycler and corporate bin merchant on Monday lifted the lid on its major new strategic initiative, specifically geared at upcycling superseded cloud and data centre kit around the world for the likes of AWS, Microsoft, Google, banks and big tech.

And the key word is big: this is e-waste literally at hyperscale.

If you’ve ever queued-up at a council e-waste drop off or winced at piles of cheap printers carelessly discarded next to charity bins, consider the size of of a data centre clean out and where all that kit goes.

Sims on Monday told investors at its strategy day that the company estimates there’s now around 6 million tonnes “of rack and server material currently in use” with around 2 million tonnes becoming available for recycling every year based on kit lifecycles of three to five years.

Dubbed ‘Recycle the cloud’, the Sims' global play aims to invert its current e-recycling value pyramid by capturing at least 10 percent of that rapidly growing junk pile and creating a far more lucrative revenue stream than the present low-value compliance-based e-scrap heap that now accounts for 75 percent of its e-recycling volume.

With China closing its ports to shipped recycling materials like glass and plastic, Sims is deliberately moving up the value chain to the very top of the tech stack where it believes there’s serious cash to be made intelligently recycling.

The processing will also be more local and specialised to reduce logistics and movement costs.

“There is a new wave of business decommissioning that is starting now,” Sims’ global president for recycling solutions Ingrid Sinclair told investors.

“We have the strategic advantage in this space.”

Sinclair said Sims has “coverage of the top 5 countries with the most data centres, the US being by far the largest” and that the push intended to capture first mover advantage.

“We go in and do the de-install, we pull the units out.”

It’s not just about grinding up equipment and extracting valuable metals and plastics. While consumer electronics increasingly have little or no residual value other than their base materials, that doesn’t seem to be the case for high end kit.

“We pull out all the server racks, the blades, we remove the memory, the hard drives, the processors, we test and sell whatever we can,” Sinclair said.

“We pull the power supply, the fans, we sell that and the rest of it winds up being commodity recovery.

“Huge units need to be torched and cut down and collected for further commodity recovery.”

Which is not to say Sims is dumping from its existing e-recycling business that, apart from landfill diversion, works directly with original equipment manufacturers (OEMs) to create a so-called closed loop for product stewardship for everything from printers to phones.

Sinclair said recycling for OEMs would remain part of the equation and noted that manufacturers are shifting to plastics that can be reconstituted into a premium resin as good as virgin plastic.

“If they are going to do recycled content, which a lot of them will do to get their energy points, they have to maintain constant supply of that plastic. Once that part is in production it is really hard to take it out,” Sinclair said.

The Sims case study for that model is HP, whose infamously cheap printers can now be ground down into recyclable elements.

It’s a far cry from around a decade ago when computer and printer manufacturers importing into Australia bitterly opposed the introduction of an e-waste recycling levy to the sales price of new kit sold here in line with other waste producing sectors.

That since reversed position led to accusations from councils and environmental groups that taxpayers were subsidising the tech industry’s sizeable toxic waste bill by not passing through disposal costs.

The stand-off with OEMs created a massive backlog of toxic e-waste after key asset disposal players like Grays walked away from auctioning computers because of plummeting prices and margins a shift that turned second hand computers into a liability rather than an asset in just a few years.