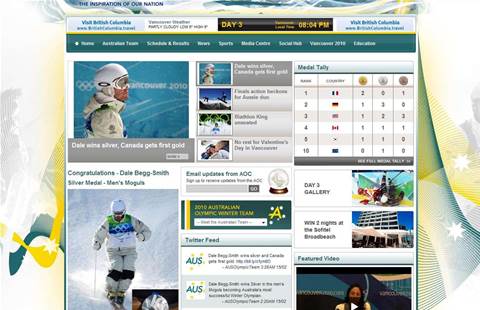 "Imagine what we'll be in for if Australia wins gold," Modesto said.

Andrew Reid, web producer for the Australian Olympic Committee told iTnews that nearly twice as many people were turning to the online site for coverage of this year's Winter Olympic Games in Vancouver in comparison to the last winter games, held in Turin four years ago.

Reid said audiences had been attracted to richer, more exclusive content on the site, including far more video and audio from the games.

But the site's popularity may also be partly attributable to better performance for Australian winter sport fans.

Between the Turin and Vancouver games, the Australian Olympic Committee decided to move the Olympics.com.au site from US-based hosting company Peer 1 to local provider Bulletproof Networks to improve response times on the site for Australian viewers.

Reid told iTnews the performance of the site had "definitely improved."

"The secret to performance in a fully virtualised environment is a very, very large high performance fibre channel SAN," he said. "The disk I/O performance, which is most important in the virtual environment, is three to four times better straight off the SAN than off local disk."

Modesto said the AOC was only using one to two percent of this capacity, but Bulletproof had additional resources on standby should Australia's Olympians win more medals. He expected the AOC site to push "multiple terabytes" of data out to audiences over the two-week course of the games.

The interest in today's competition was anticipated, he said. After the tragic death of Georgian Luge competitor Nodar Kumaritashvili, and anticipating Begg-Smith's chances at making the final of the Moguls, Bulletproof added two extra web servers and some 'reverse proxies' to shoulder some of the load and deliver better performance to viewers on the site.

Modesto said today's onset of traffic was "handled smoothly by the additional capacity and the reverse proxies."

The company was now spinning up some "warm spares" - virtual machines pre-configured for the AOC site that were ready for deployment at short notice.

Those VM's may well come into production should Lydia Lassila or Jacqui Cooper take gold in the women's aerials, or Torah Bright or Holly Crawford do the same in the women's halfpipe.

"If Australia wins gold, you want additional capacity available," Modesto said. "But this is a complex application - it's not just something you can whack in. The application developer needs to do some configuration before you bring additional nodes into the farm."