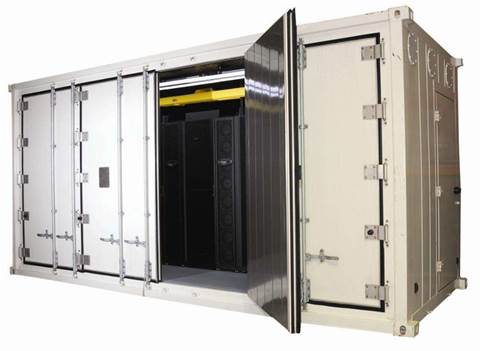 Canberra company builds a data centre in a box.

Canberra-based engineering firm Datapod has launched a line of modular container data centres which, from a base price of around $400,000, provide a complete data centre solution housed within a shipping container.

Container data centres have come into favour with the likes of Google and Microsoft, as they offer a highly modular and capital efficient approach to building out data centre capacity on demand.

The Starterpod, attached to a connection node module, is the first pod of an expandable, modular container data centre.

The foldable walls of the pods are made of 90mm thick polyurethane insulation and impervious to extreme temperatures or lightning. But they are also expandable and can be manipulated such that a new pod (or Expanderpod) can be snapped onto the Starterpod in modular fashion when more capacity is required.

The pod itself is connected to a node that aggregates the electricity, data communications and chilled water required to feed it.

The other model on display at Datapod's launch was a Projectpod - a smaller, 10 square metre self-contained pod with a single row of InfrastruXure racks - the hot air this time being contained between the exhaust of the racks and a glass panel.

The Projectpod was intended to be deployed in short-term scenarios such as mining exploration projects or in Defence operations.

Datapod's container data centres have been designed to be shipped on the back of a truck anywhere they are required - or at least, anywhere a carrier can terminate its fibre network and where three-phase power and water is available.

Datapod director Scott Carr told iTnews that after designing and building data centres for the likes of Defence and the Australian National University (ANU) in Canberra, he realised that infrastructure providers were not able to roll out new facilities "in the timeframes IT and business required.

"So we started to build on the idea of very small modules within the footprint of an ISO shipping container," he said.

"We put together a solution in a Lego-based approach. If you want extra redundancy, put some extra modules beside each other. If you want scalability for growth in capacity, deploy them as you need them."

The Datapod solution, he said, was well suited to any implementation that was short term or project-based, or for use as a disaster recovery site.

It could also be used for the augmentation of an existing data centre when an organisations' computing needs stretched beyond their floor space or power capacity, he said.

Carr said that the solution was far more capital efficient than building or retrofitting an existing data centre within a physical building.

Carr said the Datapod solution trumps the 'first generation' container data centre models offered by the likes of Sun and Dell because it was completely vendor neutral from a server, storage and communications perspective.  (The user, however, is locked into the APC cooling and power infrastructure.)

"The first generation solutions don't address the entire site infrastructure," Carr said. "We're from an engineering background, we provide a turnkey solution. Simply putting servers in a container doesn't solve any problems for my clients - the issue was how to cool it and get power to it."

Read on for more on how in-row cooling and hot aisle containment works in the Datapod.