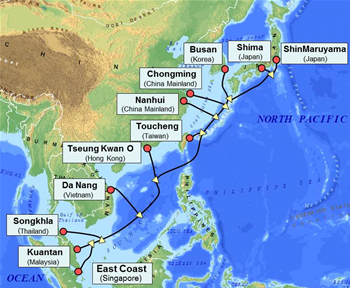 A new 10,900 kilometre cable system connecting the major economies in East and South East Asia has officially been completed seven years after the project commenced.

The Asia Pacific Gateway Cable System is a circuit that uses 100 gigabit per second coherent wavelengths, providing a total design capacity of 54 terabits per second.

APG is owned by a consortium of 13 telcos from China, Japan, South Korea, Vietnam, Taiwan, Singapore and Malaysia - all of which have access to the new cable - and is led by Japan's NTT. It connects to the United States in Japan using the Pacific Crossing-1 undersea cable.

The route avoids areas prone to earthquakes and typhoons, NTT and its cable contractor, NEC, said.

Social media giant Facebook was one of the original investors in the APG cable, despite being censored in China. It is not known if Facebook kept its US$450 million (A$607 million) investment in APG.

Prior to APG, Google and regional telcos launched the South-East Asia Japan cable system, which was ready for service in 2013.

SJC spans 9700 kilometres, has six fibre pairs and a design capacity of 28 Tbps.