Second deep space antenna to be built in WA 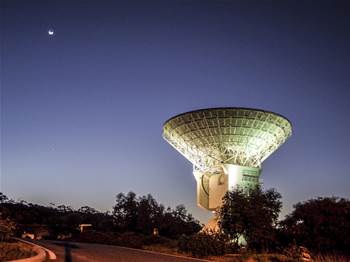 A second, 35-metre dish antenna will be built at the European Space Agency's (ESA) New Norcia station in Western Australia, with a budget of €45 million (A$70 million) for procurement, construction and building and service upgrades.

ESA and the Australian Space Agency jointly announced the build of the new antenna, which weighs 620 tonnes.

The new Deep Space Antenna 2 will use cryogenically cooled antenna feed, at just 10 Kelvin, or -263 centigrade, to achieve a 40 percent improvement at the high S and X-band frequencies used for space craft command and control systems.

Thanks to the super-cooled antenna feed, the new dish is so sensitive that it can pick up signals much weaker than those emitted by mobile phones from a distance as far away as 1.44 billion kilometres.

ESA's ground stations communicate with the BepiColombo, Gaia as well as Mars Express and the ExoMars Trace Gas Orbiter missions.

An ESA member nation contractor will assume a prime role for the project, but ESA said a signficant proportion of the budget will be spent in Australia with local companies.

"The new antenna is not only positive progress in the Agency and ESA’s cooperative relationship, but also an important contributor to the local economy which will help grow Australia’s civil space industry,” ASA head Enrico Palermo said.

Future deep space missions to Mars and Mercury are planned, and ESA intends to build more antennae around the world to communicate with the craft.

CSIRO operates the New Norcia site for ESA, and the antenna will be the fourth for the agency, with one in Argentina and another in Spain complementing the Australian dishes.