Scientists track whales, without killing them 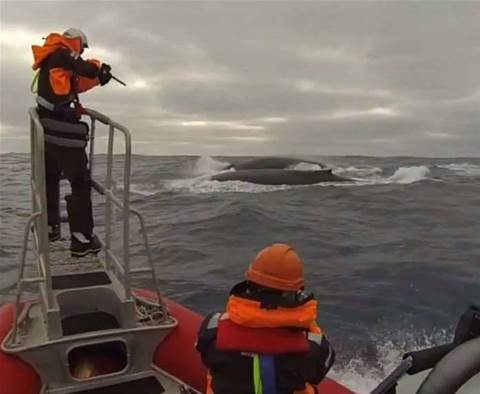 Researchers prepare to sat-tag a blue whale with an airgun in the Ross Sea. Credit: AAD

Australian researchers have shown that it is possible to scientifically study whales without killing them, by using satellite communications and acoustic tracking.

A seven-week voyage in the Southern Ocean conducted by a team of eighteen scientists working on the Antarctic Blue Whales Project under the auspices of the Australian Antarctica Division (AAD) used acoustic tracking technology and satellite tagging to study the large mammals' behaviour and movements.

Hunted almost to extinction in the last century by industrial whalers, blue whales are now very rare and hard to find.

A VHF radio transmitter floating on the surface of the sea relayed the whale noises, which can travel hundreds of kilometres in the deep antarctic waters, to the researchers aboard the Amaltal Explorer ship used for the voyage where they were recorded, Dr Miller says.

The incoming audio is also visualised in a spectrogram as many of the sounds produced by blue whales are below the frequency range of the human hearing using a "moderately powerful workstation for real-time signal processing", according to Dr Miller.

By using beam-forming, it is possible to work out the direction from where the signal was received through triangulation.

"The directional information is plotted on a digital chart in order to keep track of groups of singing whales, and ultimately to steer towards whales to obtain identification photographs and genetic samples for further study," Dr Miller says.

A paper [PDF] presented last year by Dr Miller says the technique is highly effective, and able to locate blue whales over distances of over more than 60 kilometres.

Project acousticians made 626 hours worth of recordings and analysed 26,545 blue whale calls in real time.

Once located, small boats with researchers on board were launched to photographically identify the whales and to take biopsy samples from them. The researchers were able to make 57 photo identifications and took 23 blue whale skin biopsies.

Dr Andrews-Goff says the satellite tags are deployed while the whales are deployed with an airgun from the bowsprit of a six metre rigid-hulled inflatable boat.

"We have to be within eight metres of the whale for a successful deployment," Dr Andrews-Goff says.

Data is transmitted to the satellite when the whale is at the surface and a built-in switch senses it is dry, Dr Andrews-Goff says. If an Argos satellite is overhead, the transmission will succeed.

According to Dr Andrews-Goff, data from the tags has provided unique insight into the whales' rapid longitudinal movements during the summer feeding season and more.

However, thanks to the success of the Blue Whales Project voyage, environment minister Tony Burke says the results of the trip show that it is not necessary to kill whales to study them.

Ten countries are involved in the Antarctic Blue Whales Project, studying the increasingly rare animals that were almost hunted to extinction in the twentieth century by industrial whalers.

Blue Whales are some of the largest animals ever known to man, and can reach up to thirty metres in length and weigh as much as 180 tonnes.

Results obtained from the research voyage will be shared with the International Whaling Commission to assist in the conservation and recovery of the Antarctic blue whale.