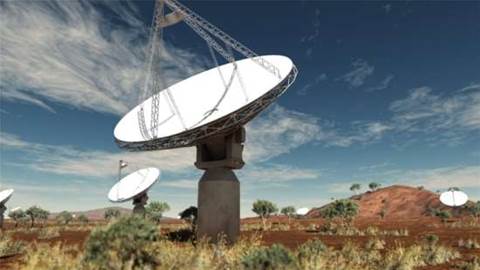 Australia and South Africa were shortlisted for the SKA in 2006 and won the bidding to build it in 2012, but the ambitious project has been hit by construction delays pushing out the completion to 2028, along with budget overruns and member countries abandoning ship.

The cost estimate overruns were made public in July this year.

In a set of notes from the chair of the SKA board, the project's programme director Joseph McMullin presented estimates for the SKA-1 Design Baseline [pdf] radio astronomy systems to be deployed in Australia and South Africa.

Speaking to industry publication Physics World, the chair of SKA's science and engineering advisory committee Andrea Ferrara said scientists are trying to persuade existing project. member states to provide more than €100 million in additional funding within the next year.

Ferrara said the current cost estimate for the project is €940 million, up from the July figures.

Should the funding to the tune of €800 million not become available, Ferrara said it would mean building an instrument that won't deliver what it was supposed to do, raising the question if it's worth building the SKA at all.

This despite slimming down the original SKA design substantially first in 2013 and then again in 2017.

"This is a distressing development, but it is just the latest in a long series of budget blowouts and delays the SKA has suffered," University of Auckland astrophysicist Dr Richard Easther told iTnews.

"However, this is the first time a senior SKA scientist has publicly admitted that the project faces existential risk," Easther said.

"Many big projects have suffered major delays, but despite the SKA's poor history, there has been no outwardly visible accountability for senior management and leadership," Easther added.

Easther said that a major radio facility in the Southern Hemisphere will be a fantastic opportunity for astronomy and astrophysics, and very much hopes something like the SKA will be built.

Ferrara said that even if the additional funding materialised, cuts would have to be made.

This includes slashing the compute power planned for the SKA and low-frequency antennae.

SKA is planning on constructing a Science Data Processor (SDP), a supercomputer scale facility to handle the large amount of information produced by the envisaged 250,000 radio telescopes in Western Australia.

The SDP computing platform would comprise hardware, an operating system, and SKA and third-party developed software.

New Zealand is also an SDP member through Victoria University in Wellington, and the NZ Alliance, led by Auckland University of Technology.

SDP was vaunted as bringing spillover effects to the IT industry on both sides of the Tasman, but the planning and construction delays meant the envisaged 50 peta floating point operations per second computing facility would only be delivered around 2030, lessening its role as a driver for industry progress.

In July this year, the New Zealand government decided to pull out of the SKA after saying it did not make sense to join the construction phase unless scientists in the country could sufficiently utilise a shared in the completed telescope.