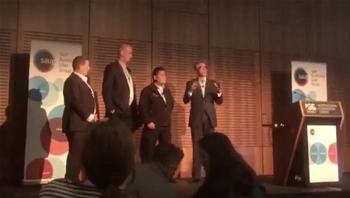 Tries to reconnect after series of exec reshuffles.

SAP’s global chief executive Bill McDermott used a surprise appearance in Sydney this morning to reassure customers in the wake of recent executive reshuffles in both its Australia and Asia Pacific operations.

McDermott appears to have quietly slipped into Australia sometime over the weekend, meeting with high-profile customers as well as SAP Australia’s local team.

He was in Canberra yesterday where - among other things - he fronted a leadership event at the Australian National University.

McDermott was back in Sydney today as a surprise guest at the SAP Australian User Group (SAUG) national summit.

While some of his remarks this morning were understood to have been directed at SAP’s artificial intelligence strategy - which he laid out at the Sapphire Now conference earlier this year in Orlando - McDermott also directly addressed customer concerns over recent leadership changes.

But the division of responsibilities for global customer operations appears not to have gone down well with some customers.

“All of the relationships that Adaire has [with Australian customers] - you don’t lose Adaire, she’s still here and we’re working everything in real time - but Jen [Morgan] is also going to redouble her efforts on the [Australian] marketplace,” McDermott told the SAUG event today.

“I met with the local [SAP] team and this was the number one topic I brought up because we had dinner on Sunday night when I was fresh off the trail from breakfast with a customer who told me the same thing.”

McDermott also acknowledged the changes at the A/NZ level.

“I am aware of that,” he said. “I am also aware of the fact that the relationship has been too sales and not enough innovation-led. I’m going to change that.”

As he has done in other world forums, McDermott reiterated that he wanted to have a tighter relationship with SAP customers.

“Arrogance is the first step to demise,” he said.

“We have to be empathetic with our customers.

“I don’t want you to feel like you’re in between a terms and conditions relationship with SAP.

“I want you to feel like the dream box is coming to a theatre near you and we’re going to sit down with you like a partner and get this right.”