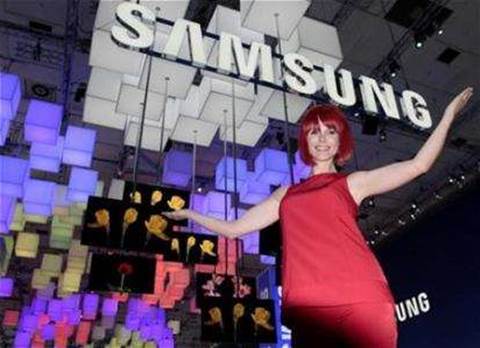 The IFA model poses at the Samsung pavilion before the start of the IFA consumer electronics fair in Berlin, August 29, 2012. (Credit: Reuters/Tobias Schwarz)

The surprise announcement at an electronics show in Berlin came a week before Nokia, which has a close partnership with Microsoft, is due to unveil its new Lumia smartphones in New York.

A US federal jury found last week that Samsung had copied critical features of the iPhone and awarded Apple US$1.05 billion in damages.

The decision led to speculation that Samsung and other handset makers using Google's Android system would be drawn toward Microsoft's phone software, which Apple has not targeted with any patent complaints.

"This is just the first in a big lineup of new hardware that's coming with Windows Phone 8, but it's a seriously impressive opening salvo," wrote Microsoft executive Ben Rudolph on a company blog showing off the new phone, called the ATIV S.

Microsoft gave a preview of its new phone software, called Windows Phone 8, in June, and promised the first phones would be on the market by the autumn.

Windows Phone 8 looks similar to, and is built on the same core code as Microsoft's upcoming Windows 8 operating system, but is not the same product. Windows 8, which will run on tablets and PCs, is scheduled to launch on October 26.

Samsung did not have the phone on display at a large media event in downtown Berlin, where it showed off tablets using Windows 8 software and also unveiled the second generation of its popular Galaxy Note phone-cum-tablet, setting high hopes for its success.

"I am pretty confident it will even outsell its predecessor," said JK Shin, Samsung's chief of mobile business.

Samsung has sold some 10 million of its original Galaxy Note devices, creating a new product category which has smaller screen than tablets, but bigger than smartphones.

Samsung hopes the new device will take the focus away from its loss of the court case. Apple is now seeking speedy bans on the sale of eight Samsung phones, moving swiftly to turn legal victory into tangible business gain.

The Galaxy Note, one of the most popular Samsung devices after its flagship Galaxy S, is not included in the list of the potential U.S. sales ban, and Samsung hopes the upgrade will lift any post-Apple gloom at the South Korean group.

"There won't be huge innovative changes in design, but the Note 2 will feature quite a few improvements and enable Samsung to carry on its strong sales momentum in the category," said Lee Sun-tae, an analyst at NH Investment & Securities.

"With the launch, Samsung will also be trying to turn around downbeat sentiment after the US legal defeat."

The new version of the Note will feature a thinner and slightly bigger 5.5-inch screen, powerful quad-core processor, the latest version of the Android operating system called Jellybean, and improved stylus function.

"The Galaxy Note II is a strong successor to its surprise hit predecessor. Its clear differentiation is a big advantage in a congested fourth quarter market," said CCS Insight analyst Geoff Blaber.