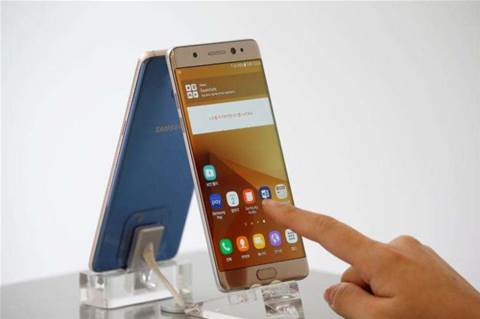 Customers urged to power down and return flammable device.

Samsung will push out an over-the-air update for its potentially combustible Galaxy Note 7 as a safety precaution to limit how much the device's battery can be charged.

The automatic software update will be delivered on November 5, limiting the battery to a maximum charge of 60 percent, Samsung said.

It urged customers to return their Note 7s for a refund.

“Customer safety is our number one priority and we are asking customers who still have a Galaxy Note 7 to immediately complete a data back-up and factory reset before powering down the device and returning it to their place of purchase," the company said.

“We continue to work with our retail and operator partners to assist customers to replace their Galaxy Note 7 devices or seek a full refund."

The impact on the Korean company's bottom line from the Note 7 debacle has been substantial, with Samsung's mobile division reporting a 98 percent drop in profits at the end of last month, compared to prior estimates of a 30 percent fall.

Last month, airlines around the world banned travellers from taking Note 7 devices onboard. The company said it would set up booths in Australian airports where customers could swap out their fire-prone phones.

Samsung decided last month that it would stop producing the Galaxy Note 7 and asked its partners to no longer sell the device.