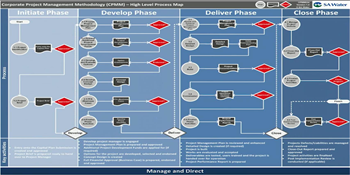 Workshops likened to stepping into The Octagon.

SA Water has revealed its early stumbles in bringing agile to bear on its IT capital delivery, culminating in a series of workshops likened to an Ultimate Fight Championship (UFC) arena.

Agile practice lead Frank Vassallo told the Business Agility Conference in Sydney that when he started at SA Water 3.5 years ago, he had designs on introducing agile to what he saw as an overly-complex and prescriptive internal corporate project management methodology (CPMM).

“At the time I said, ‘we’re going to have CPMM agile within 12 months, and everyone around me was just laughing,” he said.

“It was that sort of nervous laughter where people think, ‘He’s a nice guy. He’ll get over it’.”

Vassallo - who had been brought up on agile throughout his early career development - started to bring elements to bear in his first project at SA Water.

The project, which centred on a new mobility platform, was behind schedule and gone through its budget - and seven project managers - without “working out a build state for this mobile platform”, Vassallo recalled.

“I was heavily entrenched in that and determined to get it across the line,” he said.

“What I started to do was just bring in some techniques - collaborative design, visualising work; just some nice practices that are easy to do”.

Vassallo set up a standard Kanban board of post-it notes but found internal attitudes to even a basic encroachment of agile “quite a shock”.

Kanban: "can you take that stuff down?"

“Even this Kanban board, at the team level it was ‘are you going to put that in a Gantt chart or Excel’ and at a senior management level in IT it was ‘can you take that stuff down? It looks unprofessional’,” he said.

“I was a little bit frightened but I’m forever an optimist because I knew that the delivery leadership was keen for a change, I knew our internal stakeholders were very keen for that change because things just weren’t getting delivered and digital aspirations just weren’t being met, and our whole environment was being disrupted externally by changes in legislation.”

Eventually, it was decided there was enough appetite for change to give agile a go in IT capital delivery, though the early attempts didn’t quite go to plan.

“The thinking started with the first mistake you always make which was we’ve just got to do agile so let’s get one of the teams working as a scrum team,” Vassallo said.

“The poor BI [business intelligence] programme was pretty much told ‘you’re not delivering, we need more dashboards and analytics, we need you to start working in different ways so go and do some SCRUM’.

Unsurprisingly, that didn’t get far, since the BI team was forced to do agile within the existing complex CPMM framework.

“I still apologise to those people for the pain they were put through, because you can imagine they were trying to do this in an environment within this whole complex CPMM maze,” Vassallo said.

Out of that, it was determined that outside help would provide the best impetus for change. Again, though, SA Water faltered.

"They could have probably sold tickets"

“We didn’t know what we were doing so we needed some thought leadership. We brought a team of very smart people in - who we still work with - but again we should have picked up on the sign [that our own internal teams] just weren’t ready,” Vassallo said.

“So when the consultants came in I got what they were talking about but there was a whole group of managers and leaders [for delivery and our business disciplines] that do all the work that didn’t get it, and they were immediately taken down into a place where they didn’t feel safe.

“I attended a couple of the workshops and - I’m not a fan - but [it was like] UFC, they could have probably sold tickets. It was horrible because there was some really bad interactions there.”

At that point, the pursuit of agile was paused altogether. Those involved were scaled back to a very small group and SA Water started out again.

“We needed to provide teams with a safe framework to use and that’s where we finally landed on the decision that we needed CPMM agile, so we went about creating that initial framework so that teams could operate in a more innovative, supportive way in delivering projects in a different manner,” Vassallo said.

“The other thing was we got pretty serious about the change effort, so providing coaching, training and support to build that knowledge. And even now, we should never underestimate that.

“We’re a couple of years down the track, but that’s ongoing.”

The drive to agile also received a much-needed boost in November 2016 when SA Water underwent a major reorganisation and created a new vision and strategy.

“At the time it was presented I didn’t really understand how powerful it was for what we were trying to do in IT capital delivery,” Vassallo said.

However, it was quickly realised that agile played into the overarching strategy, and that alignment became an easy path to sell agile ways of work.

“Now what’s really powerful is when we’re introducing new parts of the business or teams to agile ways of working, we start with our strategy and decision making framework and align it to the agile values and principles,” Vassallo said.

With the company well into its agile journey, Vassallo noted that “people have been released”.

“There was a fear early on about how to do things differently, because people were very much compliance driven,” he said, noting they had to ensure they ran projects to the strict CPMM model.”

SA Water has allowed different teams to determine “playbooks” for how they want to work within an agile methodology.

“What we created with agile was non-prescriptive but what we had previously was very prescriptive, but we had to find the right balance [between those two] because people can’t start with a blank sheet of paper,” he said.

“That something was created by them with support [from us] to create these playbooks and that’s ongoing.

“We had some real champions - our business analysis, testing, project management disciplines, and IT architecture is now also coming up to speed.”

One of the most high-profile agile projects at SA Water so far has been a smart network of sensors that monitors pipes under Adelaide to identify leaks.

“It’s been an award winning project delivered in June last year, and we’re onto stages two and three,” Vassallo said.