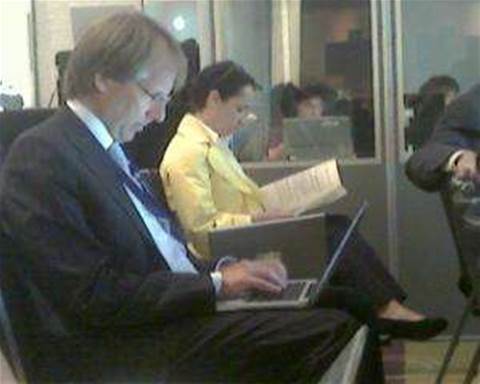 Australian out, cybersecurity expert in.

America's former cybersecurity "czar", Rod Beckstrom, is expected to be confirmed today as chief executive officer of the global organisation that oversees web addresses, the Internet Corporation for Assigned Names and Numbers.

An ICANN spokeswoman said the board was still voting in Sydney at 10.40am AEST on a replacement for Paul Twomey, the Australian who has led the group that allocates internet protocol numbers and top-level domain names for six years.

Dr Twomey was head of the National Office for the Information Economy before joining ICANN.

Beckstrom (pictured), an author, high-tech entrepreneur and Fulbright scholar, was expected to take up duties soon after he was presented to media and analysts at ICANN's meeting in Sydney this afternoon.

He left the position as head of the US' National Cyber Security Centre (part of the Department of Homeland Security) in March after a year, claiming that the civilian agency was infiltrated by spooks from the super-secret National Security Agency.

Dr Twomey said in March that he would step down from the chief executive officer's role this month but would continue as president until the end of the year.

Dr Twomey was suggested as chairman for the Federal Government's $43 billion National Broadband Network, expected to be announced next month.