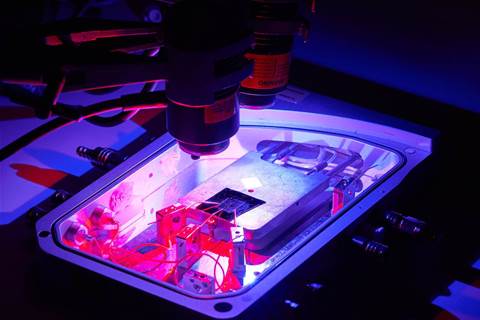 Researchers at RMIT University have used an emerging light-based tool in biotechnology to develop a chip that replicates the way brains store and lose information – paving the way for more efficient computing.

Optogenetics is a biological technique that allows neuroscientists to manipulate neurons with light, allowing them to be turned on or off very precisely.

The new chip applies the same principle to an ultra-thin layer of black phosphorous, which changes electrical resistance when exposed to different wavelengths of light.

“Being able to store, delete and process information is critical for computing, and the brain does this extremely efficiently.

"We’re able to simulate the brain’s neural approach simply by shining different colours onto our chip.”

As different wavelengths are shone onto the chip, the polarity of the current being generated is reversed, which the researchers likened to the binding and breaking of neural connections that lead to learning or forgetting information.

While black phosphorous is generally avoided for use in optoelectrics due to defects that are often inherent in the material, the team from RMIT’s Functional Materials and Microsystems Research Group were able to use precision engineering to harness those defects to create the chip’s new functionality.

They also demonstrated that the chip can perform logic operations and is compatible with existing electronic devices.

“This technology takes us further on the path towards fast, efficient and secure light-based computing,” Walia added.

“It also brings us an important step closer to the realisation of a bionic brain - a brain-on-a-chip that can learn from its environment just like humans do.”

The chip has also been shown to work on a flexible platform, allowing it to be integrated into a number of devices for use in different environments, including bendable and wearable technology.