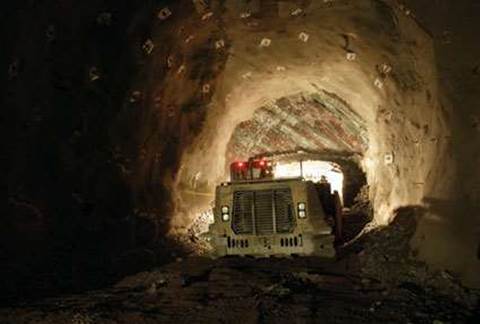 Brings system from east to west.

Rio Tinto will deploy a sizeable automation system in its Argyle Diamonds underground mine in Western Australia.

The mining giant has committed to an AutoMine system made by Swedish giant Sandvik Mining.

The system includes 11 LH514E electric loaders and two LH410 diesel loaders that will be operated remotely from a surface control room, and associated software systems.

The Argyle mine will be the first in Western Australia to use block caving, which according to a Rio Tinto statement "involves the controlled collapse of ore from under its own weight, into specially-designed chutes for collection".

"The ore is then brought to the surface for processing," the company explained last week (pdf).

Block caving is expected to extend the life of the Argyle mine "until at least 2019".

The mine had been an open pit operation, before Rio Tinto decided to build an underground mine below the existing pit operation in 2005. The miner put $US803 million ($787 million) into the transition in September 2010.

Sandvik Mining expects to deploy its automated systems into the underground mine in "2012-13".

The system is expected to enhance safety, underground operational efficiency and production.

The Argyle deployment also represents several milestones, notably being the "largest underground mining automation installation in the world to date".

"This order is a very important milestone in the growth of our fleet of AutoMine not only in Australia but globally as well," Sandvik Mining's vice president of mine automation Riku Pulli said.

Rio Tinto last week revealed it had 20 trainees undergoing substantial block caving training, including in an "immersion theatre that allows geotechnical data to be displayed in a 3D 360 degree simulation and an underground simulator room".

It is not the first such implementation for Rio Tinto, which runs a similar block caving operation at its Northparkes copper and gold mine in central western NSW (pdf).

The Northparkes AutoMine deployment is operating 24 hours a day in a production capacity.

"It has proven to be a safe and efficient technology, and the work undertaken at Northparkes will significantly streamline the delivery, implementation and support process at Argyle," Sandvik noted.