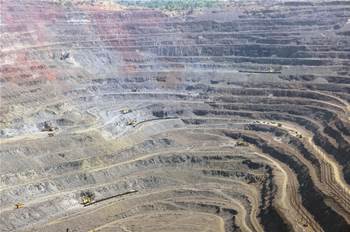 A group of a dozen physicists and geologists from mining giant Rio Tinto and the University of Western Australia is two years away from commercial production of a tool that could dramatically expand the scope of mineral exploration in Australia.

VK1, a collaboration between the mining giant and the university, is an airborne gravity gradiometer that harnesses quantum physics, superconduction, liquid helium cryogenics and aerial survey data to solve the ultimate challenge facing iron ore miners: how can we see underground?

Australia has become a reasonably mature exploration environment, according to Stephen McIntosh, head of exploration at Rio Tinto.

"The dilemma for Australia is that somewhere between 70 and 80 percent of the continent is covered by something. You actually have to see through a veneer of something to explore underneath the surface - to a mineral deposit a few metres to hundreds of metres below your feet.”

Invariably the most accessible, high-grade deposits have been explored, but iron ore miners rarely know precisely what lies further beneath.

“For the majority of deposit types, there is nothing to say that a few hundred metres down from the earth’s surface that you wouldn't find as many new deposits as we have found close to the surface,” McIntosh said.

“It's a fertile playground down there but actually a very difficult one to play in.”

Oil and gas companies solve this problem using seismic surveys to discover gas deposits - because the telltale signs of a deposit tends to be a large basin tens of kilometres wide and several kilometres deep, with an anticline at the top where gas could potentially be trapped.

The signs of high grade iron ore deposits are tiny by contrast and surrounded by other geological noise.

One of the key metrics used to consider a site for exploration is density - a measurement of the earth’s gravity field.

To date, measuring density has required meters that sit on the surface at tens or hundreds of metres apart, which requires access to land before the mining company can get a genuine sense of what value it might hold.

Rio Tinto has tried aerial surveys of various forms but typically the results were an order of magnitude too low a resolution to “unambiguously unravel the mysteries of the rocks.”

The VK1 is a difficult beast to explain. It’s internals sit in a “big thermos flask of liquid helium” cooled to -296 degrees celsius, and contain two magnetised metal bars.

The machine attempts to measure the difference in movement between the two bars as the VK1, strapped in a light plane, flies over the earth’s surface. The leading bar will move first as it has a greater magnetic attraction to the earth, the trailing bar moves second. 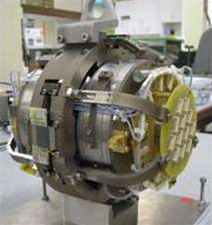 The VK1
The VK1 then measures the tiny scissoring movement between those two bars to determine the density of the material the plane is passing over.

There is an overwhelming volume of noise that has to be filtered out for a meaningful result. The system must, for example, account for when the bars moving in unison - which represents the motion of the aircraft as it bounces around in the sky.

“We need to get rid of 10 billion units of noise to extract the one unit of signal that we want,” McIntosh said.

Removing this noise has been an exercise that has taken decades to refine. BHP Billiton developed the predecessor to the VK1 in the late 1990s and early 2000s, in what was then referred to as the Falcon airborne gravity system, but sold the technology soon afterwards.

“Their system was great, but we knew it needed another level of quality,” McIntosh said.

Development of the VK1 began eight years ago, and has been redesigned on several occasions since the first test flight in August 2010.

The UWA has built a test facility, which sits the VK1 on a robotic hexapod, whose accelerometers are programmed to bump and lurch according to flight data. Every fortnight the researchers sit it on a truck and drive it around Perth, and occasionally send it back into the air for further refinement. 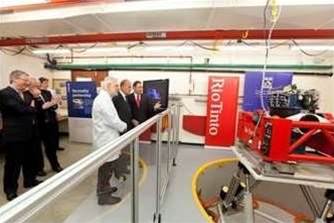 The VK1 atop its hexapod

Previous modelling has given the project an end-state at which it can be assured enough noise has been filtered out for a clear picture of the earth’s density.

“We are grinding our way down to a magic number,” McIntosh said. “It’s getting closer all the time. We hope to have this system operating at commercial level within the next two years.”

If Rio’s project is able to help “unravel the mystery of the rocks”, Australia is likely to be a key beneficiary, he said.

Most large, new exploration projects have been in the developing world - areas where for whatever reason (economic development, political regulatory risk) the easier surface deposits haven’t been subject to exploration until now.

“We would love to do more in Australia - the odds are against us until we can cost effectively explore deeper down,” McIntosh said.

Being able to survey deep underground using aerial surveys is “the holy grail” of deposits exploration, he said, and because of the nature of the Australian continent, “it is something pursued here more than in any other country in the world.”