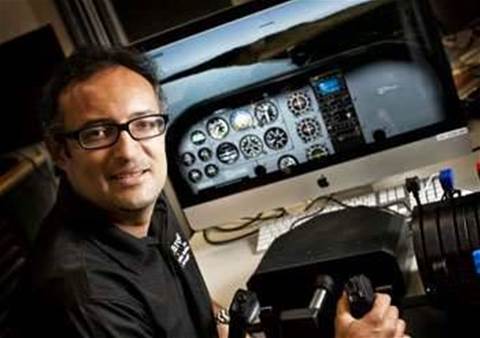 Queensland University of Technology researchers have started developing an information system that could enable unmanned aerial vehicles to sense and avoid other air traffic.

Dr Luis Mejias Alvarez, an engineering lecturer at the Australian Research Centre for Aerospace Automation, hoped the research would also be applicable to commercial aircraft.

The project has been awarded $375,000 in funding from the Australian Research Council and is expected to take three years to complete.

Dr Mejias said the information system could equip UAVs with a "higher level of intelligence so that they can both sense and avoid other traffic and determine appropriate landing spots should the need arise."

"UAV flight plans are set pre-flight, and if something goes wrong and they need to land they have no way to determining where the safest landing spot is," he said. "In most cases they just drop."

It is hoped the technology could allow use of UAVs in commercial airspace, since they would be better equipped to deal with deviations from set flight instructions.

Dr Mejias also said the University hoped to improve the situation for commercial pilots who faced mid-air emergencies by providing them with systems that could "help them choose appropriate" emergency landing sites.

He said that researchers are working on "a GPS-based system that will incorporate a camera to pinpoint to the pilot any larger, vacant spaces that would provide landing options."

"This might be a field or farm, or even a road or river," he said.

"When things go wrong with an aircraft while it's in flight a pilot has to try to manipulate a lot of instruments to gain control of their aircraft.

"The focus of their attention is on the instruments within the cockpit. It's very difficult to also visually scout around the surrounding area to find the best possible places to land, particularly when the terrain below may be unfamiliar to the pilot."