Remote workers are drifting into isolation: here's how to recentre and boost morale and productivity 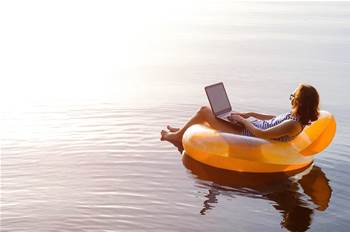 Putting an end to that discombobulated feeling.

You know the feeling already ... you're there, but you're not really there.

Despite ever more companies and their workers flocking to the flexibility of remote work, research into ‘virtual teams’ now shows performance and culture can actually start to decline if the experience isn’t carefully curated.

Dr Florian Klonek from Centre for Transformative Work Design based at Curtin University says that while virtual work spaces can sometimes outperform traditional office-based teams, such success can depend on how virtual teams are managed.

It's a dilemma that's hit even the biggest proponents of the 'work from anywhere' dream that's used to sell always-on connectivity.

Even IBM, the veteran champion of remote working, has significantly changed its tune and recently told its remote staff to spend more time in the office or face-to-face with clients.

“There are many benefits of virtual communication and collaboration including being able to draw experts from all over the globe, lower maintenance costs for office spaces, working in different time zones, increased flexibility, less time spent communicating and better work-life balance,” he said.

“Despite the obvious benefits, there is evidence to suggest that virtual teams can lead to team performance decline.”

And as anyone who's been recruited into a virtual team for the first time will attest, there can often be feelings of isolation and a strange disconnection even with tools like instant chat. And let's face it, stand-ups that are really conference calls do tend to feel a bit mechanical.

So the question begs, how do you shave off the rough edges of remote working to keep its participants happy and humming. It seems there are real world tools.

Klonek recently co-authored a paper examining how the negative impacts of remote work can be mitigated, or even reversed, by redesigning virtual workplace culture.

“We found that job resources, such as feedback, social support and job autonomy, were especially helpful for teams who operate under increased levels of virtuality.”

The research findings suggest that feedback helps limit the negative consequences of reduced interactivity found in virtual environments (watercooler chat isn’t exactly something that comes naturally when there is no watercooler to gather around).

Similarly, social support compensates for the lack of warmth, trust and cohesion, which is often experienced in virtual collaborations, while greater team autonomy allows team members to switch between communication channels to pick ones that work well for them in different situations.

It also appears that task interdependence, where co-workers need one another for access to critical resources like information, materials or expertise, led to an increase in remote teams’ motivation, creativity, and team learning.

Co-author Professor Sharon Parker added that the research also identified work design features that are more likely to be detrimental to the function of virtual teams.

““We found that when teams have more complex, ambiguous, non-routine, and pressured tasks, it is quite challenging to achieve high levels of performance as a virtual team,” Parker said.

“It is especially important in these more difficult situations to provide support and autonomy to virtual teams so they can work together well as a team.”