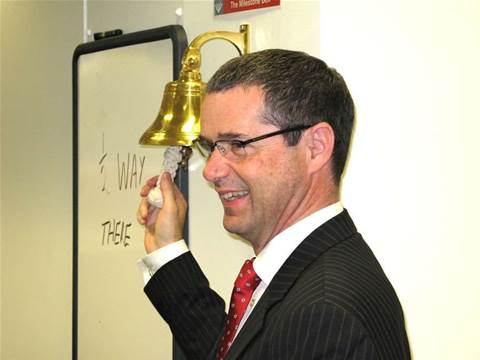 Whoah, living on a prayer.

Communications Minister Stephen Conroy and Nextgen Networks have formally celebrated reaching the halfway point in construction under the Regional Backbone Blackspots Program, just as the project reached the 60 percent mark.

The Federal Government's Regional Backbone Blackspots Program (RBBP) was intended to provide competition in the backhaul market in regional areas, opening up new markets for ISPs and faster speeds to users.

Construction of the network began in February 2010. The plan called for around 6000 km of fibre, and as of today, some 3596 km has been completed.

During a tour of the national project office in Mulgrave (suburban Melbourne), Minister Conroy was invited to ring a ceremonial bell used to mark project milestones and was presented with a belt buckle as a memento of the visit.

Peter McGrath, group managing director of Leighton's telecommunications division said the project was on track to deliver metro-equivalent broadband services to regional areas beginning in March 2011, and contracts have already been signed with major ISPs that will deliver the lowest prices ever seen by customers in these areas.

By March, services are expected to be online in Geraldton (WA), Victor Harbour (SA) and south west Gippsland (Vic), depending in part on the weather (significant rainfalls could slow progress).

McGrath suggested ISPs are probably already installing DSLAMS at Telstra exchanges in these areas - "an exciting change in these regional towns."

The longer sections of tyhe RBBP covering Emerald and Longreach (Qld), Darwin (NT), Broken Hill (NSW), the South Australian Riverland and the Victorian Riverina should be complete by September 2011, with services going live towards the end of that year.

Conroy said the progress of the RBBP shows "the Government is getting on with delivering the National Broadband Network for all Australians," and that 400,000 Australians stand to benefit from the program.

The RBBP network will be Federal Government property, but will be operated by Leighton for at least five years. The $250 million price tag includes operating costs for that period, and it is envisaged that it will at some stage become part of the NBN.

The RBBP should provide more than 100 points of interconnect, with provision for more at approximately 10 km intervals along the route. A minimum of 10 Gbps will be available on any portion of the trunk network, and the use of DWDM means this can be upgraded incrementally as and when demand requires.

Much of the route runs over private property. More than 7500 notices have been issued to land-owners, with around 100 still to be completed.

"There have been some pockets of resistance" for example in western Queensland, said a project official, suggesting that it may be politically motivated.

Another 230 agreements have been signed with local authorities, utilities, and similar bodies.

Care is being taken to minimise the environmental impact, and in some cases the route has been realigned to protect, for example, significant areas of vegetation. The protection of cultural heritage is another priority, and more than 100 indigenous groups have been consulted.

Nextgen said it wa proud of its safety record. In over 500,000 person-hours of work there have been no 'lost time' incidents, according to McGrath. He described this as "a major achievement," and added that no incidents with the potential to cause serious injury had occurred.

Among other precautions, all of the project vehicles are fitted with tracking device, and employees wear clip-on devices when away from a vehicle. An alarm is automatically raised if they appear to be stationary for too long, although this can lead to false alarms when people are working on time-consuming tasks such as splicing.

Nextgen won the tender for the NBBP in December last year, and partnered with Visionstream for the design and construction work.

Visionstream was set up as a Telstra subsidiary for the rollout of its HFC network, but two years later became a wholly-owned subsidiary of Leighton.