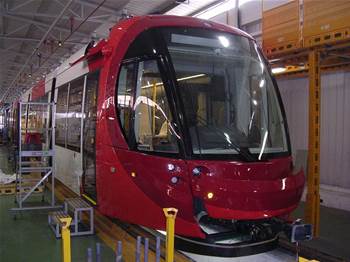 “Transport for NSW is developing a project to provide real-time information to ferry and light rail customers,” a spokesman told iTnews.

“While there is no timeframe for delivery locked in, we hope to provide real-time data to ferry and light rail customers within the next year.”

The department has already handed over real-time GPS feeds for buses and trains to six software developers, who subsequently created Apple and Android smartphone apps for commuters.

According to the most recent figures released by Transport for NSW, usage of the apps has nearly doubled from inception, to an average of 40 million requests for arrival times being sent through the apps every month.

Rupert Hanson, creator of the Triptastic app, said he had been “genuinely surprised” by the enthusiastic feedback from tram users when he added light rail to the tool, and is looking forward to upgrading the current service to real-time.

Hanson was one of six developers which successfully made it through a ‘hot-house’ pitching exercise run by PriceWaterhouseCoopers on the NSW government’s behalf in 2012, and were awarded with access to the feeds as a result.

He said releasing the data selectively– rather than the government developing apps in-house or with contracted developers – not only eases the taxpayer burden but ultimately delivers a better product.

“Take a look at the 131500 app, which is still available in the app store, as an example. It is not particularly useful and I think it reflects what happens when you simply put out an EOI for developers and see what you get back,” he said.

He congratulated Transport for NSW for adopting the General Transit Feed Specification (GTFS) real-time open data standards into its technology mix, which he said made life a lot easier for developers dealing with an hourly 250MB of incoming bus and train information.

Once trams and ferries have joined the real-time tracking landscape, Hanson said he would like access to Opal card APIs to create a tool allowing users to view their account balances and travel histories.

“At this stage there is no raw data available about how the traffic network works either,” he said.

“Ideally I’d like to create an app that gives the user the impression of sitting in a tower and watching the whole integrated transport network playing out beneath them, with the ability to filter out particular modes as they wish.”