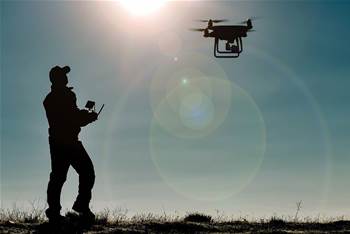 Researchers at the Queensland University of Technology have developed an algorithm to help drones replicate a human pilot’s ability to visually detect other aircraft and adjust flight paths to avoid collisions.

The algorithm analyses data from visual inputs to spot other aircraft at a range of more than 2km, boosting the weak visual signal of such distant objects while reducing surrounding noise, QUT Centre for Robotics chief investigator Professor Jason Ford said.

Current guidance for human pilots is that they will need at least 11.4 seconds to commence an avoidance manoeuvre once they visually detect another plane or other aerial vehicle - a feat that will need to be replicated in autonomous drones or other unmanned aerial vehicles (AUVs).

Ford said the system is particularly useful in replicating a human’s ability to recognise and track the same object as it moves in and out of view.

“Imagine you're observing something from a cockpit and it’s hidden against the clouds. If you watch it over a period of time, you build up confidence something is there," he said.

“The algorithm does the same.”

The algorithm has been in development over the past decade and is based on a mathematical model known as the Hidden Markov Model (HMM), which was developed in the 1960s to allow for predictions of unknown or hidden variables from observed information.

Ford said that one of the biggest challenges in developing the sense-and-avoid system for UAVs was making it small enough to fit on lightweight drones with the end goal of enabling drones to be more easily used in general airspace for commercial purposes.

Test flights to collect information began in 2010, with the initial proof-of-concept flight system being able to visually detect another aircraft while in flight in 2014.

Since then, the research has largely focused on improving the performance, size and cost of the technology to make it more viable for commercial applications.

This latest development came after a series of related research projects, including the Smart Skies Project and the Project ResQu, supported by Boeing Australia and Insitu Pacific.

“The algorithm has been evaluated and matured in regular flight tests, with strong positive results, and we are looking to transitioning its use as a baseline technology in regular beyond visual line of sight operations,” Williams said in a statement.