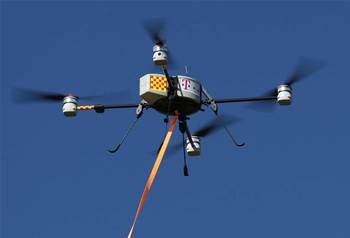 But covert ops are off the agenda... for now.

The Queensland Police Service has revealed it is currently operating two unmanned aerial vehicles in regular operations, following a trial commenced back in 2012.

Described by colleagues at the Australian Federal Police as being “the most mature and extensive in their use of UAVs” amongst the nation’s law enforcement, the QPS first deployed the drones on Boxing Day last year during a siege on the outskirts of Brisbane.

Fronting a committee of federal parliamentarians on Friday, senior officers running the program listed a commercially manufactured CyberCopter and an internally constructed octocopter as making up the QPS fleet.

They said the drones were primarily used to provide aerial “situational awareness” to police in high risk situations like the Brisbane siege, or to act as an extra set of eyes during search and rescue operations conducted in hazardous surrounds.

Quizzed on the privacy implications of the new capability, the QPS representatives said there was no immediate plan to expand use of the drones into covert intelligence gathering operations – largely due to height caps set by the aviation regulator.

“Our use right now is limited to really overt activities,” head of the unmanned vehicles program Inspector Brad Wright said.

“When we turn up at a scene there are usually already a lot of police there. Because we fly at under 400ft the drones are really quite noisy, which limits our capability to be covert.”

He didn’t rule out moving into more secretive drone activity in the future.

“This technology will continue to improve and expanding its application will become a consideration...but that is not part of our current project,” he said.

The 400ft height limit for small drone flights has been imposed by the Civil Aviation Safety Authority (CASA) which regulates commercial drone use. Beyond this, operators need approval from CASA to enter flight space.

The cap wasn’t the only CASA rule referred to the committee as impeding the use of drone technology in an emergency services setting.

Also appearing before the committee, Assistant Commissioner John Watson from Queensland’s Fire and Rescue Service said his agency would have to think carefully about rules requiring drones to remain within the sight of operators before following the QPS into a full deployment.

“Line of sight limitations could be a problem for us,” he said, citing smoky bushfires and flying drones into damaged buildings as examples of uses where vision would be hard to maintain.

He said drone manufacturers would “have to improve mapping interfaces” before the technology could meaningfully be used by his organisation, but said he was confident the technology was maturing.