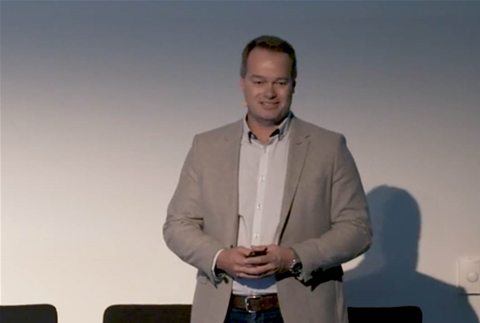 Overhauls its operating model in the first year.

Qantas is two-thirds of the way through a group-wide digital transformation that is redefining its internal operating models and helping the airline “punch above its weight” on customer and product experience.

Head of digital direct Nandor Locher told the Adobe Symposium Australia 2018 last month that, while there is still “a long way to go”, the program is already creating “a movement across the organisation”.

Locher said the airline is a year into its digital transformation journey.

“We’re two thirds through the program so it’s not done yet,” he said.

“It will probably take us another 6-12 months to truly embed these new ways of working and massive change at a scale we’ve got in place.”

The effects of the change project are expected to be significant. Already, Qantas’ digital properties like qantas.com and its apps contribute around one-third of its airline revenue - about $3 billion in real dollar terms.

Digital and IT combined has about 300 people, with most co-located with partner resources at Qantas’ Mascot headquarters in Sydney.

“But there was still a range of challenges we were trying to address to really go from good to great to world class,” he said.

“The digital teams had a degree of distribution and fragmentation across the organisation. There was a degree of inconsistency, partially limited collaboration and communication between teams, duplication, inefficiencies - the usual stuff you find in business organisations.

“It’s the nature of evolution of how digital has come about and how this capability has evolved within large organisations.”

Locher said that Qantas had been “throwing a lot of investment into digital” even before his appointment.

“It felt like we were just getting to the point where we’re catching up to the best in class,” he recalls.

“The transformation was about how we [could] really accelerate and unlock extra value to allow us to become a true leader.”

“We wanted to make digital a sustainable competitive advantage for the organisation” he said.

“Digital has [to] become part of the product set.”

For Locher, digital transformation at Qantas cover three key aspects of its business.

“First and foremost it’s certainly around the transformation of the digital experience, which is around the customer,” he said.

A second key aspect are the digital technology enablers to that journey, and Adobe forms part of that technology stack.

Locher defined this as “the replatforming of the world”-  making sure the airline had the “right underlying technologies and data structures” in place to drive change.

However, as he has gone through the digital transformation process, Locher said he had “come to the realisation” that driving a step change in the way Qantas operates, works, collaborates and engages with customers and other parts of the organisation was the real key to achieving customer experience improvements.

“We’ve been really doubling down internally on the digital operating model and the ways of working to create amazing experiences,” he said.

“The rest is almost a consequence of that.”

In saying that, however, Locher noted it was ultimately the combination of those three keys that drove real change in the customer experience.

“It is about organisational structures, agile ways of working, technology and tools. It’s really all aspects that come together and need to work in harmony and in synchronisation in order to achieve the [customer experience improvement] outcome,” he said.

About a year ago, Qantas set up an internal program of work to drive the culture change element, which it codenamed ‘Imagine’. The program was assigned a dedicated program team which included resources from the likes of the Dentsu Aegis-owned Isobar Australia.

Likewise, Qantas established a second program of work centred around the customer, which it codenamed ‘Target CX’.

“A chief customer officer was appointed and the digital team was moved from the sales and distribution organisation into the customer organisation which was a fundamental shift in the thinking and really positioned digital in a great way to enable the customer strategy,” Locher said.

Attaching dedicated resources on the programs was necessary to ensure they took root.

Locher noted the programs would not have taken off if existing leaders had been saddled with transforming their areas, in addition to keeping business-as-usual (BAU) functions in motion.

“The leadership teams we have in place are stretched as it is,” Locher noted.

“They’ve got big portfolios and all of a sudden they need to run a big transformation.”

Locher said that balancing BAU delivery and transformation objectives “was a real challenge”.

“There’s no silver bullet,” he said.

“One part to it was to establish a dedicated program team and actually seek support from external which helped, but two was to give leaders the freedom to prioritise the transformation.

“I was very clear to teams: we may need to manage expectations in the business but right now we need to double down on the transformation, otherwise this is not going to fly and we’re going to be in changeland forever.”

But establishing persistent program teams was a challenge in and of itself, because it represented a completely new approach to funding staff resources.

“Probably one of the hardest parts [we faced was] to move away from a project funding model to a capacity funded model in order to establish persistent teams,” Locher said.

“Up until now, every single person on the floor was funded by a project one way or another and people came and went. Whoever had a cheque in hand had a say.”

Locher said that establishing dedicated digital transformation resources represented a “significant” and “brave” investment by the airline into its future.

He noted it was not “a blank cheque - we will be making sure we deliver value.”

“But to get that over the line was really [important to] unlocking the journey,” he said.

“We worked very hard in focusing not just on the cost but what do we unlock in terms of tangible benefits around revenue and commercial value but also the customer experience and [the capabilities of] our people.”

Digital transformation at Qantas remains a work-in-progress. The airline has restructured the organisation to put the customer at the centre of its thinking, and that in part has meant deconstructing old ways of thinking around “lines of businesses, departments or even platforms”.

Like many other large organisations, Qantas has taken inspiration from the Spotify agile model, re-organising staff into tribes, squads, chapters and guilds.

“We’re really creating horizontal capabilities to tie together roles and skills of a similar nature.”

Locher said that Qantas had put “a lot of time and effort into creating a very comprehensive set of guidelines” to drive digital transformation forward.

“It is really a guideline that empowers teams to define their own ways and evolve from there.

“That’s a key deliverable of the new process. We didn’t want to pull people into new teams and structures without giving them also very clear guidance on how they need to operate in this new world and give them the tools and the training.”

Locher noted that the transformation timescales were somewhat fluid out of necessity because the airline group had several times been forced to revise its expectations as it battled internal complexity.

“We had to recalibrate our expectations throughout the program several times but we realised it was the right thing to do,” he said.

“This is not the time to rush it.”

He noted that while there is still “a long way to go” before Qantas is able to “really realise the benefits we set out to achieve”, the early signs are promising.

“We’re seeing much greater collaboration across the teams,” he said.

“Our speed to market is starting to increase through more frequent iterations and releases. The new currency we all deal with is speed to market, speed to value. Again we’ve got a long way to go but the pace is picking up and people have really been keen about the improved speed.

“In addition, the [internal] conversation is changing to a value based one rather than business-driven one, with the customer firmly at the centre.”