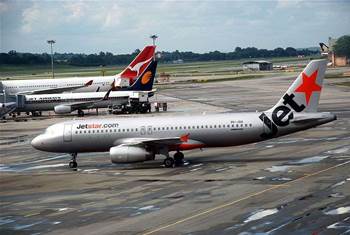 Stephen Tame, chief information officer (CIO) of low-cost carrier Jetstar, says technology comes second to process. In an interview with iTnews editor Brett Winterford, he explains how to create a lean but responsive service delivery operation at a fraction of total revenue.

iTnews: What are some of the major challenges you face as a CIO when it comes to managing costs in Jetstar?

Tame: We have similar challenges to the industry at large. The last 12 to 18 months have been difficult, not only for airlines, but for all industry.

We're facing challenges in regard to capital. We now need to operate [with the] understanding that capital is at a premium.

We also have to operate in a very competitive cost environment. Airlines are probably the most challenged when it comes to that, but it's also true across other business. So we're constantly looking at how we can change our cost delivery model, in order to achieve better outcomes.

And last, but not least, is the problem in regards to carbon. Even though there has been some delay to carbon accounting and carbon credits and so on, IT as a business still represents somewhere between 2.7 and seven percent of the world's CO2. [It is] 2.7 if you just believe in the servers and infrastructure, but if you count the whole IT it becomes a much larger footprint.

We have to think about how we can become a lot greener, because if we don't, those costs are going to come to our business. We either lead the challenge or we face the consequences.

iTnews: In what ways is Jetstar leading those challenges? Have you evaluated any carbon accounting products? Have you talked to any of your third party providers about what they can do to help you meet those goals?

Tame: First of all in regards to carbon accounting products, even though there are a lot of consultants who are positioning themselves as experts in that field, the rules haven't been written yet, so it's somewhat hard to actually target and identify how you can react.

However, in regards to delivery, we have been very focused on how we manage it. We've actually virtualised all of our infrastructure at all of our airports, so we don't operate PCs at airports -- it's all thin clients. While that saved me money, it also reduced the [carbon] footprint by 85 percent, compared to traditional PC assets.

iTnews: Can you outline some potential strategies that a similar company might consider for achieving greater ICT efficiency at a board level?

I'd like to start with looking at what are the core IT services that the business should be in the market [for], and how they can best manage those services.

The challenge the IT business has is that there are more kids coming out of secondary school and university with IT skills than ever existed before, so these people are pretty educated already, and don't need the IT department to manage that.

So I think the focus has got to be on where the core services are -- around how you deliver and best manage the core business process in regards to operational, financial or engineering systems. The delivery of it is somewhat secondary, but the management or supply of services is where IT businesses are heading.

The next logical step to move is outside of what you would classify as the core back end IT, and moving into the front end business process itself and looking at how we can benefit systems and services there.

iTnews: Just how lean can an operation like Jetstar run its IT?

We have been focused on that for the past four years. We currently are operating the third largest domestic airline in Australia and the second largest low-cost carrier in Asia, so we are an organisation of significant size. We also have a very aggressive growth path: we have been growing 20 to 25 percent for the last four years and our business plans have us growing 20 to 25 percent per year for the next five years.

That said, I currently have IT staff of five full time people. I classify ourselves as being almost 100 percent outsourced in regards to services and services delivery. What that means is that I can actually run a very cost-effective organisation where the total IT cost, as a percentage of revenue, is about one per cent. In fact, last year it was below one per cent, which then returns significant benefits to the business.

Not only is it around how effectively you run the services, but as I mentioned before, what services you operate. So if I was to say that I was still running traditional PCs at airports or in the office my costs would be a lot higher than they are now because the cost of running a thin client machine is almost nil.

iTnews: Do you see this as the shape the industry is morphing into in the next few years?

Tame: I think it's very much the shape and definitely in Australia. We have got to think of some of the significant changes in and around the industry. First of all, from a Jetstar point of view, I operate at the moment in 11 locations across nine countries and so far, I have not delivered any IT offshore.

If you have a look at Australia, there's this promise of this National Broadband Network occurring across Australia over the next three or four years. I think we're all challenged to think [about] what that's going to mean, but if you have 100 megabit access to every home and business in the country, then the actual delivery of virtual services without infrastructure becomes a real possibility. And I think it's going to be a big change in the way IT businesses and IT departments have to structure themselves moving forward.

iTnews: You mentioned that you're just about a 100 percent outsourced company. What would be the first few questions you would ask of any organisation that was looking to pitch for IT or business process outsourcing work for Jetstar?

Tame: We don't apologise for our [low cost] DNA and it's built into our entire business life. What I am interested in essentially is how agile and how cost effective they are. So when someone walks into our business, I'll be questioning them to say, well, why is it that you can deliver me a better cost outcome or cost of ownership than your competitor?

There are some businesses who demonstrate to me agility around thinking and services and therefore they are more likely to be able to work with us than others that don't. And it's not that I'm not willing to pay for services that I want. What I am interested in is to only pay for those services that I need.

A lot of outsourcing companies come in with their price tag and their formula for the services they offer. But when you say you only want service number four, six and 12, they can't actually cut down their standard offering and that's where I really need to be: to look at ... not the services the supplier wants to sell me, but the services that my business needs to purchase.

iTnews: You have been quoted on iTnews.com.au as saying that the development of applications and services is no longer the role of the CIO. Instead, it's more about the role of managing third parties that have a core competence in that area. Does that make the CIO role any more or less engaging for you? Where do you feel now that you innovate?

Tame: It makes it more interesting in that we are operating on behalf of the business as the core service provider. What that means is that those services are not going to be built or sourced internally because in this day and age, there are organisations out there that can do that more cost-effectively than you could internally.

Previously the argument had been specialisation in services to the point that it can deliver a competitive advantage. That's why you developed this product or that product internally. These days, it's not the systems themselves that create the competitive advantage, it's actually the processes around those. It's the way in which they are used and operated and integrated within the business. So the time when somebody said, 'I bought this ERP and therefore I have got a competitive advantage' -- I think [that] disappeared about five to 10 years ago.

I think every CIO can put their hand on their heart and say they have seen the world's best system being delivered and not used properly, and therefore delivering zero outcome. Similarly you can say that you have seen a relatively poor system being delivered and yet the outcome has been quite significant due to the way the business has been operating to use that toolset.

So what I am indicating here is that it's not necessarily the value in the toolset that have got to be uniquely built in-house in anymore, it's the value of how you operate and use those tools within the business that delivers the advantage.