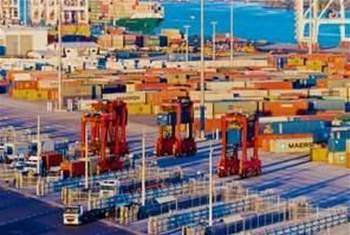 Over $77m worth of equipment and IT.

Victoria International Container Terminal Limited (VICTL) will spend over $21 million on control systems and the integration of equipment at its new automated terminal being built at Port of Melbourne.

Last year, the consortium laid out over $56.6 million (€40 million) for 12 automated stacking cranes and 11 automated shuttle carriers for the new port facility. Once the cranes lift containers off a ship, they can be set down in "buffer zones" and picked up by the shuttle carriers, which transport them to other parts of the port.

Now, VICTL has awarded an additional $21 million (€15 million) contract for software systems and integration services to bring the software and hardware elements of the project together.

All work is being performed by subsidiaries of Finnish cargo-handling giant Cargotec. Kalmar is the big winner, and will supply the automated equipment and associated control systems, a terminal logistic system and integration services on the port side, and an automated truck handling system on the landside.

A terminal operating system to be supplied by Navis, another Cargotec subsidiary, will also need to be integrated.

Kalmar said the full integration would require "virtual simulation as well as testing of the components with live equipment at the Kalmar technology and competence centre in Tampere, Finland."

ICTSI's head of Asia-Pacific, Christian R. Gonzalez, said the latest contract was a "natural step" and he hoped to lock into Kalmar's "knowledge and experience from similar automation projects throughout the world".

VICTL won the rights to design, build and operate the new international container terminal and container park in May last year. Phase one of works began in late 2014 and are expected to be operational by the end of 2016.

Kalmar is no stranger to Australia's ports, which are increasingly shifting to automated systems. The vendor is already supplying equipment to DP World's Port of Brisbane container terminal upgrade and Patrick's Brisbane terminal. It is also in line to supply equipment for Asciano's Port of Botany revamp in Sydney.