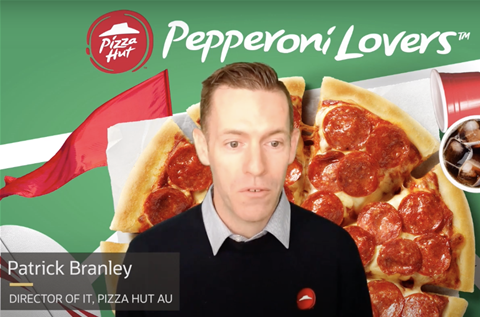 From the kitchen to the point-of-sale.

Pizza Hut Australia said it has taken digital ordering “to another level” over the past year with investments spanning apps, payments and kitchen management.

Director of technology Patrick Branley told an Oracle food and beverage industry forum that while the pizza maker was “geared up” for a greater focus on digital channels and home delivery during Covid, there had still been work to do and investments to make.

“[Online was] definitely already the primary ordering channel for us as a business but that’s just increased with the current situation. That’s driving our investments.”

The company’s initial focus was on contactless ordering, pickup and delivery.

“When the restrictions first came in, for example, we had to implement contactless delivery very quickly. We actually implemented that on our digital platform and within our POS within 12 hours,” Branley said.

“Contactless pickup was also another initiative of our operations teams so that we didn’t have lots of customers in the foyers of our restaurants waiting for pizzas.

“The other investment [we made] from a digital perspective was QR code ordering so having a big QR code out the front that customers (scan) so they didn’t have to enter the restaurant so we didn’t have people queueing up waiting for their order.”

Pizza Hut Australia has since paid close attention to every element of a pizza order and sought to refine each step with digital technology and enhancements.

He also said attention had been paid to “making our app as easy as possible” and to “reducing as much friction for customers as possible for their digital ordering.”

“We’ve just gone to another level of detail with ordering,” Branley said.

“It’s an app where every click is analysed in terms of how we get customers through that purchase funnel.”

Some of this functionality is powered by an investment in an Oracle cloud-based point-of-sale (POS) system and kitchen management software by Dragontail Systems, an Australian company.

“We’re running a piece of software from Dragontail that automates that whole kitchen flow for us,” Branley said.

“We’re very transparent with the customer as to where their order is being prepared, when it’s in the oven, is it being dispatched and then once it’s with a driver they get a GPS tracking experience.

“We extend that even to our phone system so, for example, if you place an order on the website and then you call our 131166 number maybe to enquire about where your order is at, the phone system will say, ‘Hey your order’s in the oven, your ETA is 6.30pm’, for example.

“So every channel that the customer interacts with us on, we’re able to give them information about their order status.”

Also on the backend, Branley said the company had invested in delivery management software that used artificial intelligence to make routing decisions for each order.

This included whether to send an order using Pizza Hut’s own drivers or via a food delivery “aggregator” like DoorDash.

Branley said Pizza Hut Australia used aggregators as a “marketplace”, but added they were also useful at a time when drivers for its own branded delivery were hard to find.

“At the restaurant level, the international student market - because there’s no students coming into the country - is a challenge for delivery driver labour,” he said.

“Outsourcing of delivery fulfilment to aggregators helps us in that regard.”

Branley said Pizza Hut’s AI made the ultimate call on how to get a pizza to a customer.

In a blog post, it was noted that the AI system is also communicating with the kitchen management system when it makes decisions.

“For example, if the system knows it takes three minutes to prepare a pizza and eight minutes to cook, the system will send an alert to start cooking the pizza when a free driver is 11 minutes from the store,” the blog post said.

Branley added: “You can order directly from Pizza Hut on our website and using our delivery management software, the algorithms make a decision as to whether our own internal drivers will deliver that order for you, or whether we need to overflow and outsource that to one of our delivery partners like DoorDash.

“So you may order on Pizza Hut on our main site or our app and a DoorDash driver may deliver that order for you.

“We’re making those decisions using AI constantly as to which fulfilment model makes sense - which way are you going to get your pizza the fastest.”

Branley said part of the company’s success with technology investments to date was maintaining an operations focus in its projects.

He said he had specifically brought in developers “who are former store managers and shift managers” in Pizza Hut’s store network.

“I try to bring that operational side into the technology so we’re delivering experiences that are operations-friendly,” he said.

“Equally, I know the operations team have people with IT backgrounds working for them and they help us with the rollout of new technologies into the restaurants, so they understand the technology but they also understand the operations to kind of smooth out those rollouts, because there is a significant amount of change rolling through our business with all of these technology changes.”

In addition, Branley said investing in training at the store level ensured that the company’s technology investments were well-made.

“What I’ve noticed is it’s more the operational aspects of these rollouts - it’s the investments that you give to train franchisees, training the team members in the restaurants on how to use this technology, that is actually the tipping point as to whether the project is a success or not,” he said.

“You can eventually get all the bugs out of a piece of software, but the success at the end of the day comes down to whether the team members will use it or not, and that comes with training and that transition planning of how you roll something out.”