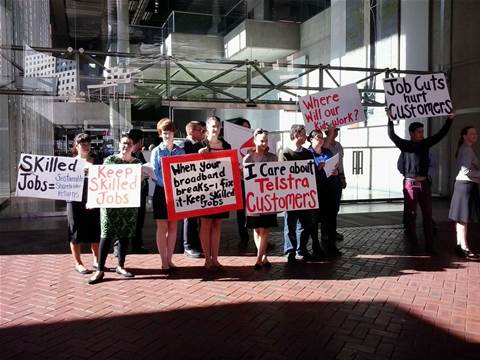 A small contingent of protesters met shareholders outside Telstra's annual general meeting in Sydney to highlight the impact of the carrier's ongoing restructuring.

Community and Public Sector Union (CPSU) lead organiser Teresa Davison told iTnews she believed some shareholders would be concerned about "the human cost" of the cuts, which the union claimed could be as high as 3152 positions.

"But we think [shareholders] should also be concerned about the long term cost on the business and for their dividends if Telstra is making such large scale cuts to their workforce who come up with the new innovative devices and products," Davison said.

Telstra received about 1600 questions from shareholders in advance of today's AGM, with employee redundancies and dividends two of the four main themes.

"We completely acknowledge Telstra needs to make changes and do business differently," she said. "It's about at what point do they actually consider the impact on staff."

She urged Telstra to consider staffing issues as the future direction of the firm is planned, rather than "at the very end when it's too late for retraining".

Telstra said last month it would cut 1100 operations staff by June next year. It is also offshoring 170 jobs from its cloud business and cut up to 650 Sensis workers this year.

Telstra chairman Catherine Livingstone told shareholders the "size and nature of our workforce is rebalancing to reflect that some parts of our business are reducing in size, while other parts are growing".

She said that while 1100 operations jobs would be lost, "close to 1000 jobs" could be added by the operations division "in other areas".

CEO David Thodey said in the case of offshored call centre workforces, they were "held to the same standards of customer service, privacy and security information" as local employees.