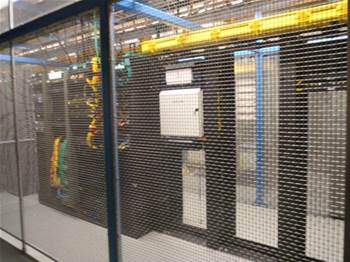 Linked gallery: Inside the Equinix data centre in San Jose

Exclusive look at SV1 and sneak peek at SV5 facility.

Equinix has confirmed that its forthcoming SV5 data centre at San Jose will adhere to green construction standards and use ‘free cooling’ technology.

iTnews understands that several variations to the standard non-raised floor in a hot/cold aisle configuration that is a staple of Equinix centres globally are under consideration for SV5 but that no decisions have been taken.

The building itself will be constructed according to Leadership in Energy and Environmental Design (LEED) green building specifications.

It will be fitted out in two phases.

The second phase – to be built whenever demand warrants – has capacity for an extra 1,600 cabinets.

Collier said that SV5 phase one would use a direct expansion (DX) refrigeration system (that is, chilled by a refrigerant).

Both phases would see refrigerate economisers installed. Economisers are also used in the SV1 centre adjacent to SV5.

The San Jose site that hosts the SV1 and SV5 data centres started life as a ‘black box’ centre for IBM.

It was acquired by Equinix in 1998 when the first phase of SV1 was built. Phase two was completed in 2000.

“SV1 is the hub of Silicon Valley,” Collier said.

The Equinix Exchange located in SV1 encompasses peering points that serve other Equinix centres in the Silicon Valley area – SV2, SV3 and SV4 – via a diverse fibre ring connecting the facilities.

SV1 has an average rack density of 1.75 kW. SV5 will support an average 4 kW per cabinet, according to Collier, although higher densities are possible, as long as customers are willing to pay for the space.

Collier said Equinix had received a US$131,404 rebate from its electricity utility in California for energy efficient projects in phase one of SV1.

It has most recently changed the lighting in the phase one area from incandescent lights to LEDs.

“As new technology comes out, if it’s available we’ll use it,” Collier said.

“It helps us stay green.”