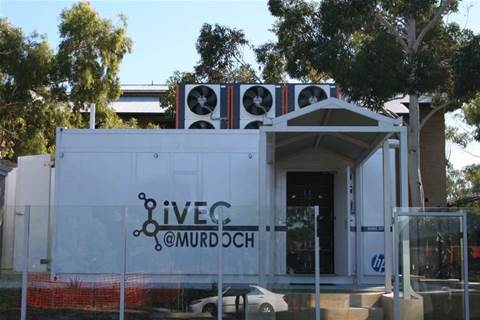 The 87.2 TeraFLOP supercomputer in a container at Murdoch University.

Researchers to apply for time on world's 87th fastest machine.

Supercomputing group iVEC has invited its first applications from researchers seeking access to its $5 million Linux cluster at Murdoch University.

The 9,600-core HP POD deployment is housed in a single container outside Murdoch’s School of Business, IT and Law.

It comprises HP Blade servers and 500 terabytes of storage, can operate at 87.2 TeraFLOPS, and was ranked 87th on the Top500 supercomputer list last November.

Epic@Murdoch is part of the Australian Government’s $80 million Pawsey project, expected to offer petascale computing by 2013 through deployments at the University of Western Australia (UWA) and iVEC’s Pawsey Centre in Kensington.

Minister Day announced that the Western Australian Government had committed a further $15.8 million over four years to attract skilled workers to the Pawsey Centre.

Minister Carr said the Federal Government made “no apology” for Canberra's own investment in the project, explaining the funds were unlikely to be provided by the private sector.

“These facilities I won’t mind telling you are quite expensive, and in these times, it’s very difficult people to make these investments,” he said.

“We do this because we think the nation’s future depends on it … Governments have the obligation to provide the very best we can afford.”

In return, Carr called for researchers to help “reshape” the world, by developing ways to “feed the hungry”, “cure the sick”, and “save the planet”.

iVEC planned to begin allocating time on Epic@Murdoch to applicants from July. Applications were to be evaluated by a combination of science and supercomputing experts.

The supercomputer’s early adopters had large, compute-intensive projects, including: the study of particle collision in nuclear fusion; simulating an exploding star; and applying climate prediction models to square-kilometre areas.

Many were positive about the facility, despite having experienced teething problems as issues with cooling and other systems were ironed out.

“I know very well the problems that [iVEC] had all the way from the beginning,” he said. “I have to say I’m in awe of what they’ve done.

“They’ve been very helpful and we’re pleased that it’s up and running now, and when I look at the things they’ve had to deal with, I can only shake my head.”

By also simulating output data from the 1.5 billion Euro, international Square Kilometre Array (SKA), Cornwell hoped to gain an understanding of how the telescope might work.

The research – and more broadly, the establishment of the Pawsey facilities – were expected to improve the Australia-New Zealand bid for the SKA, expected to require some $670 million of ICT.

Potter used Epic@Murdoch to simulate the expansion of supernova remnant SN1987A, visible in 1987 to the naked eye.

He hoped to shed more light on theoretical supernova models by comparing his simulation with real-world observations of SN1987A.

Launching the first round of applications this week, iVEC advised that allocation of time would be determined by “mechanisms agreed by iVEC and the Australian Government”.

The application process was a “much more formal method than in the past”, it wrote, noting that the first round was a “learning process” and would be treated accordingly.