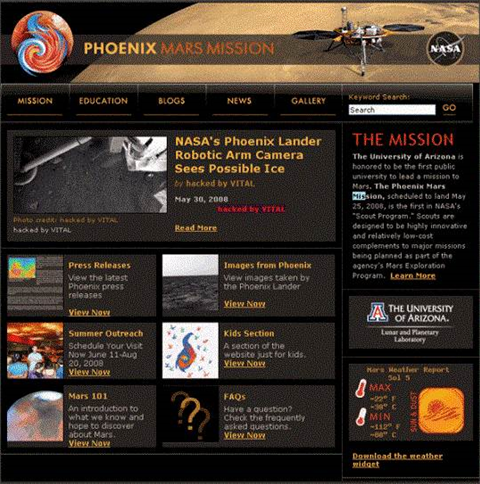 A hacker hacked the website of the highly publicised Phoenix Mars Lander Project over the weekend changing the lead story, media reports have claimed.

According to the Associated Press, a spokeswoman for the Phoenix Mars Lander Mission said a hacker took over the mission's public Web site on Saturday night and changed its lead news story.

The hacker, inserted his signature and a link that redirects visitors to an overseas Web site, claimed the spokesperson.

Overnight, security vendor Trend Micro confirmed in a blog post that traces of such a hack occurring exist.

“Right now, the site, which is hosted by the University of Arizona, has already been cleaned. However, the hacker droppings still left traces on Google’s cached results,” said Carolyn Guevarra Technical Communications on the Trend Malware Blog.

The Project received global headlines on May 25 after safely landing on Mars after launching in August 2007.

“Surely, its successful landing is another one of those one-small-step-for-man-one-giant-leap-for-mankind types of events that cyber criminals surely won’t miss out on - for social engineering use that is,” Guevarra said.
Got a news tip for our journalists? Share it with us anonymously here.