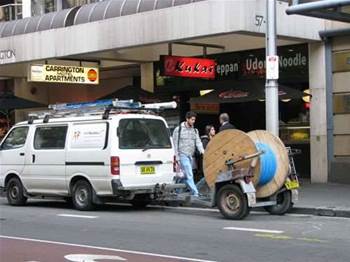 Sydney's notorious parking police have added to pressure on Telstra engineers to fix a fibre optic cable cut in the city's central business district, which has left the areas without access to services since Tuesday night.

The city ranger told Telstra workers and contractors to move their vehicles, which line the street next to the scene of the repairs. Workers told iTnews they needed to be close by as the repairs would take longer if they were to park elsewhere.

"[The] contractor ... was doing exploratory trench works and for some reason or another they haven’t been aware of the Telstra ducting that was 400 millimeters below the surface encased in concrete," he said.

It's been reported that the contractors told Energy Australia they used "Dial Before You Dig" before digging. An audit of the contractors, work equipment and procedures was being carried out.

"We are working 24 hours to get everyone back and that’s why we are working on installing the fibre optics first," Middelton said.

Middleton said the process of repairing the fibre would take at least a week.

"There’s over 10,000 copper pairs [which] is going to be an intricate job that is going to take about a week for us to get all of those customers back up again. You’ve got to make sure you’ve got the right pair from the exchange. It’s a time consuming job."