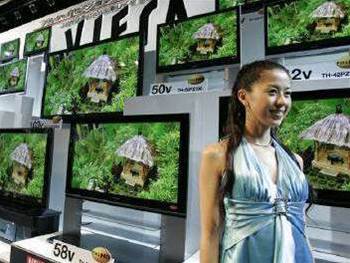 Mega-plant due to commence operations in May 2009.

Matsushita Electric Industrial, the company behind the Panasonic brand, has teamed up with chemicals group Toray Industries to build the world's largest plasma TV factory.

The firms announced plans today to build the plasma display panel manufacturing facility in Japan, which will be able to produce one million units a month.

The new factory will be the fifth display plant to be created by the firms, and will operate under the aegis of Matsushita PDP Company Ltd.

It will be constructed in Amagasaki near the firms' existing fourth plant. Construction is scheduled to start in November 2007 and the first phase of production will begin in May 2009.

The firm also estimates that over 30 per cent of the global aggregate demand for TVs will be for 37in or larger flat-panel TVs by 2010.

Panasonic said that it did not expect LCD screens to eclipse plasma-based systems.

It anticipates that the global plasma display panel market will grow to 30 million units in 2010 "because of the superiority of such TVs to other flat-panel TVs in terms of production and cost efficiency as well as picture quality".

Got a news tip for our journalists? Share it with us anonymously here.
Copyright ©v3.co.uk
Tags:
hardwarepanasonic plasma