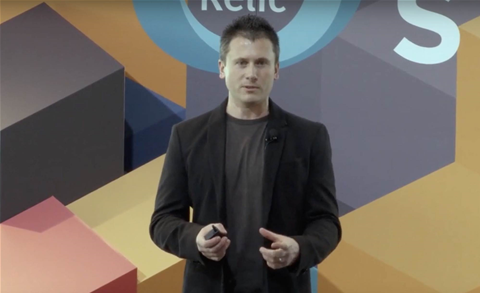 Head of digital IT Evgueni Iakhontov.

Origin Energy has spent the past two years transforming its retail operations in the hope that it can win customers over with digital experiences instead of price discounts.

Head of digital IT Evgueni Iakhontov told the recent New Relic FutureStack19 summit that electricity retailers generally had to find new ways to compete for custom in the wake of government-led changes to the industry that came into effect July 1.

Retailers in NSW, SA and SE Queensland must comply with a new electricity retail code that caps the price they can charge for services in a year, and also makes it easier for consumers to compare the offerings of different retailers.

Iakhontov said that prior to the code, electricity retailers advertised steep discounts as a way to differentiate themselves in the market.

“What you actually ended up paying [could be] very, very different.”

The code put a stop to that.

“The government has now regulated how much the energy retailers can actually charge,” Iakhontov said.

Coupled with the fact that energy is typically a “low engagement” purchase, retailers needed to find other ways to differentiate and market themselves.

“Customers don't really have brand loyalty. You don't really care whether you get electricity from AGL or from Origin, because the quality of electricity is the same. The lights are either on or not on,” Iakhontov said.

“When the prices are the same, then the price differentiator kind of goes away, so the only thing that we can really differentiate on is the service and the experience that the customers actually have and they get from us.”

While Origin recognised the need to differentiate on experience and service, it faced a challenge in both domains.

“People that did try to use [online] couldn't login or do some basic stuff.

“Our customers had been trained to call us because the digital experiences were pretty bad.”

This did not necessarily matter while Origin was able to compete on price and discount levels, Iakhontov said.

“In the new environment, we needed an amazing digital experience, because where the prices are basically the same between the different providers, the customers will go to the provider that offers them a really easy sign-up [or] move experience,” he said.

“For the majority of the people, you don't really want to think about your energy. It's a utility, you just want it to be on. It's an admin of life.

“So we needed an amazing ‘Uber-like’ experience.”

“Whenever we needed to ship one new feature, we kind of had to send the entire truck,” he said.

“We did do weekly releases, but each release literally took five or six people the majority of the day to actually babysit that release into production.

“We also had an outage when we were doing the deployment.”

Additionally, Iakhontov said the digital team was largely “driving blind” as it made changes.

“Every time we'd do a deployment, we didn't really know what was going to be broken,” he said.

“I can't count the number of times where I'd get a call, and someone from our customer care team would say, 'Hey, we're getting some reports that the customers can't login'.

“We didn't really have any observability.”

When things broke, customers were unable to select plans in order to complete move requests, or go online to pay bills.

'Everything works for me'

The changes Origin has pursued over the past 18 months to two years are substantial, stretching across tools and internal culture.

Origin restructured and substantially increased the presence of its digital IT team.

Where at one point it was 20 people split between Sydney and Melbourne, the team was consolidated to Melbourne and increased to 150 people “in the space of about 12 months”.

The team is now structured into tribes and squads and is focused around different “customer journeys” such as billing, sales and usage.

The tribes and squads can also call on central resources from a “tech hub” and a “UX hub”.

“[The hubs] are really something that enables the tribes and the squads to go faster,” Iakhontov said.

Origin also “chipped away” at its monolithic architecture.

“As we were doing that, we changed the tech stack as well and automated as much [of it] as possible.

“We introduced React and Node(.js). We still have a lot of Java-based services as well.”

The company also deployed New Relic to establish observability across all aspects of its digital platform.

“We started to get real-time visibility into what issues are actually happening,” Iakhontov said.

“Not that we could fix the issue straightaway, but at least we were seeing they were happening and we could start to address them.”

One reason the team could not perform immediate fixes was that “a lot” of Origin’s retail systems “relied on third party tools and … providers”.

“But at least we started to have a conversation with them when things were broken,” Iakhontov said.

Iakhontov said the team has now shifted from weekly to daily releases of new features.

“Our speed of change is not limited by how fast the team can actually do it.

“So we can deploy fast, but if the organisation or the customers are not ready to accept that change, then that speed is a bit of a wasted effort.”

The tribes and squads work under a DevSecOps model, though Iakhontov noted tweaks the the model are ongoing.

“DevOps is great, until you start talking to [the developers] about carrying a phone and reacting to things after hours, and that's been a challenge,” he said.

An ongoing challenge is how teams react to problems with third party-built or hosted components that affect the customer journeys they are responsible for.

“We found that because not everything is within the control of our team, we do have some backend systems and third-party APIs that we use. Sometimes the alerts go off, and we can see that the feature is broken. It's not [to] the standard we built, but we own it,” Iakhontov said.

“So we’re still finding that right model where we still need to have the DevOps model, and we still want to have that culture of ownership.

“But with the effort that we put into automating testing and deployments, we're finding that the stuff that we write is actually rock solid, and the stuff that breaks is usually not our stuff.

“So we're now starting to look at whether we have the on-call after hours support model right.

“Do we actually need to have a developer to play almost like an incident manager role, rather than fixing stuff.”

Another challenge with operating at pace is the potential to create complexity that starts to counteract the gains.

“Our teams have become really effective and efficient at building stuff, but the more stuff you build, the more stuff that you have to look after,” Iakhontov said.

“We haven't necessarily solved that challenge yet, but it's something that we're starting to look at.”

Origin is working towards enabling an omnichannel model where customers can start and complete journeys across a range of digital channels.

The company is also hoping to enhance its digital offerings to help customers lower their energy bills through smarter usage and analytics.

“If we can provide you, as a customer, a disaggregated view of what your energy consumption looks like: how much you're consuming on appliances, how much your standby power is actually costing you, or how much your other things are costing you, then you can make smarter decisions on what to do with that,” Iakhontov said.

“We really want to be in a position where we can provide you some tips and recommendations on what to do.

“But we also see some use cases starting to emerge where the knowledge that we have in terms of your energy consumption [may be useful to] other aspects of your life.

“For example, if you have an elderly parent that lives somewhere, and from our usage view we can see your grandma always puts the kettle on around 7:30am, if we see that the kettle hasn't been put on until 9am we could potentially alert the customer and say, 'Hey, you may want to check up on your grandma because we're not seeing the pattern of behavior that is normal'.

“So we really see an opportunity to give you a lot more visibility of what you use and how you should use it.”