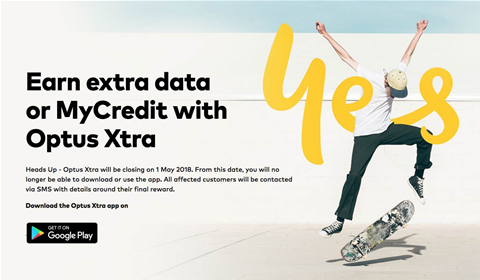 Xtra gets the chop.

Optus is shutting down its Xtra service which gave prepaid users a way to earn data quota or phone credit by agreeing to be served with ads.

The service was launched back in November 2016 after a beta trial with 5000 users.

It required users to download an Android-only app that enabled Optus to serve ads “automatically” on the device’s lock screen.

Users could then either tap the advertisement to “find out more” or swipe right to unlock the device and the ad would disappear.

In return for viewing ads, users were rewarded with either 1GB of extra data or $2 of phone credit a month, depending on the prepaid plan they had signed up to.

But the service is set to be shut down only 1.5 years after it launched.

“Optus Xtra will be closing on 1 May 2018,” Optus said in a brief statement on the Google Play store.

“From this date, you will no longer be able to download or use the app.

“All affected customers will be contacted via SMS with details around their final reward.”

iTnews understands the decision to cull Xtra was taken for commercial reasons during a recent update to the telco’s prepaid offerings.

Xtra came out of the Optus Yes Lab, which is also behind other innovative services such as a Siri-like assistant that could sit in calls.

“We scoured the market for a number of potential partners and discovered Postr, a New Zealand based startup, had the best technology,” Yes Lab said of the process developing Xtra.

“Together with Postr, we built the MVP [minimum viable product] app over a six week sprint.”