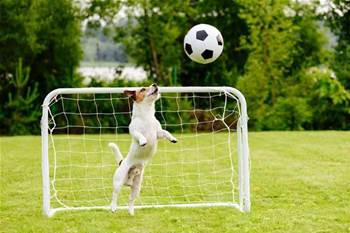 Optus chief executive Allen Lew has pledged multi-device streaming services for the FIFA World Cup 2018 will be restored by the end of Wednesday.

The telco was last night forced to send matches back to free-to-air broadcaster SBS for the next 48 hours, amid escalating fan outrage and a phone call from Prime Minister Malcolm Turnbull.

In a press conference big on contrition and apologies but minimal on technical detail, Lew said Optus was now handing out Fetch Mini set-top boxes to customers experiencing difficulties.

The telco is staying well away from detailing what technologies, vendors or partners are causing the paid streaming service to choke, with Lew describing the so far temporary move to traditional broadcast technology on simulcast as a “failsafe back-up”.

“I don’t think it is of any benefit to single out any particular vendor, system, service or network at this stage. We need to be very clear that we hold full accountability,” Lew said.

“As we enter new broadcasting territory and explore new technologies there are risks.”

Lew said the appeal of streaming was it allowed consumers the convenience of consuming content on multiple devices in multiple locations.

“The quality of experience is limited by factors such as the device, the network, the wi-fi and other things. We are working on some of these to make sure the vast majority of Australians will enjoy a good viewership of the game regardless of where they are.”

Lew said Optus would use the period when SBS simulcasts all matches “to test the solutions robustly” and that in two nights' time the issues would be resolved “for the vast majority of Australians.”

The Optus chief conceded there were places that “streaming cannot be guaranteed” but said Optus would be “very clear” about where these were, again, in two days.

Asked if Optus had miscalculated viewer demand, Lew offered that “demand is no reason for us to have made the mistakes that we did over the weekend so I apologise for that.”

On the issue of refunds for $15 a month streaming packages, Lew said Optus would say more after the two day remediation.

In the interim, Fetch Mini boxes would be made available for free to customers that experienced streaming issues.

“We know the Mini boxes have better encoding technology and can continue to have a good video stream even at lower bandwidth than some other devices,” Lew said.

The Optus chief firmly batted away a suggestion rival carriers may be limiting capacity so as to see Optus fail.

“I generally don’t believe in conspiracy theories. As an industry…we are being commoditised. Video is the best way of engaging customers. I don’t think it serves the purpose of the industry… for one of my competitors to make us look foolish because it makes the industry look even worse. We need to work together,” Lew said.

Optus is similarly not revealing the traffic or viewer numbers which have triggered the painful streaming fails.

“I can’t tell you the actual numbers because of confidentiality between the rights owners and us. We should have been able to anticipate the demand a lot better, but we obviously did not,” Lew said.

Optus’ immediate strategy, Lew said, was to use the period of the free simulcast to more accurately ascertain what the base load would look like.

“At the end of the day it’s all about getting data and extrapolating from that data. We’ll have two more days of experience. There are some very important games…which will give us a good benchmark,” Lew said adding that upcoming matches would provide better understanding.

“There will be six new data points for us…to give us a better view and a better assurance that we can deliver a service to Australia,” Lew said.

Streaming sponsors, Lew admitted, were not happy with Optus’ World Cup own goal.

“Everyone is very disappointed, to put it mildly,” he said.