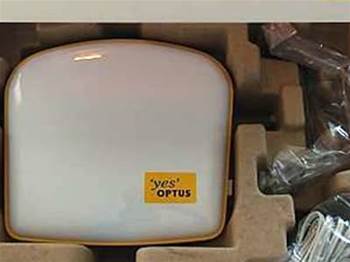 The telco today announced that its 3G Home Zone will be available from July 31st directly from Optus for retail and small business mobile customers, following a limited pilot in April.

The device, manufactured by Alcatel-Lucent, allows authorised mobile devices within a 30-metre radius to make calls via a home or office broadband connection.

An Optus spokesperson told iTnews that an average household in their trial used 1 GB of broadband data a month.

Home Zone devices would not be used as a mesh network to increase overall network coverage, he said.

Broadband data usage by the service will be unmetered for Optus HFC, ADSL, Fibre and NBN customers.

While the device is technically capable of 12 simultaneous users, Optus recommends a maximum of four as each connection requires approximately 200kbps of bandwidth.

For an additional $5 a month, users on plans worth at least $59 a month will receive unlimited calls to Australian landlines and mobile numbers.

The same offering costs $15 a month for customers with plans worth $49 or below.

And while the femtocell boosts mobile signal for other Optus mobile customers in the household, only the customer who signed up for the Homezone will receive unlimited calls.

The offering was marketed as a 'home phone' service and initially launched for post-paid Optus mobile customers.

Prepaid customers who choose to buy the 3G Home Zone device for $240 outright will receive improved reception, but not unlimited national calls.