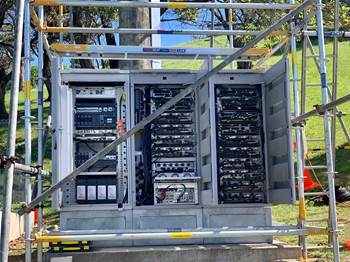 The New Zealand government has set the reserve pricing for management rights in the 3.5 GHz radio-frequency spectrum band for 5G, with a minimum of NZ$250,000 (A$240,017) per 10 MHz lot in the March auction.

While spectrum management rights in NZ can be allocated for 20 year periods, the ones in Auction 20 are for a short two-year term beginning in the middle of this year and ending on October 31, 2022.

The reason for the truncated two-year terms stems from multiple claims by indigenous Māori iwi for a just and equitable share of all radio spectrum in the country.

Communications minister Kris Faafoi in February last year said [pdf] that there is an outstanding Treaty of Waitangi claim over radio spectrum, but that it is impractical to delay all planning for an allocation this year until it is resolved.

The GSMA telco industry organisation has recommended 80 to 100 MHz of bandwidth per operator to realise the full benefits of 5G, but bidders in the short-term auction are limited to 40 MHz each.

Faafoi estimated in February that a much larger 320 MHz of 3.5 GHz spectrum could be made available for national network operators, an amount later reduced to 210 MHz.

A cap of 80 MHz for each would allow for up to four operators, Faafoi said.

The short-term rights will be allocated nationally and must be used according to telco industry forum 3GPP 5G standards and cannot be resold, the Radio Spectrum Management agency said.

Shortly before the summer holidays, the NZ government said it had set aside 50 MHz of 3.5 GHz spectrum for Māori, which could be onsold or leased to network in the country for the two years the management rights are valid.

Successful bidders in the March short-term auction must also return existing management rights in the 3.5 GHz band held by them to the Crown.

A discount on the purchase price will be applied if spectrum is returned, based on the per-MHz price of the winning bid, RSM said.

To be eligible to participate in the auction, interested parties need to deposit NZ$500,000, RSM said.

Telco incumbent Spark (formerly Telecom New Zealand) which is expected to launch 5G service in July this year said it could work with the spectrum amounts in the short-term auction.

"40MHz is sufficient spectrum for the next two years until the main spectrum auction, and will allow us to deliver a wider range of 5G services in the relatively early stages of New Zealand’s 5G adoption," Spark spokesperson Ellie Cross said.

Vodafone New Zealand which in December last year launched 5G service in the country and which has 53 MHz of existing 3.5 GHz spectrum, said that there was not enough time to think through the complexities of the short-term allocations.

“While we are pleased that further details have been released, it appears not enough time is being taken to think through the various complexities.

The risk of rushing the process is any allocation decisions made now will have significant impacts on the longer-term spectrum allocation post-2022,” Vodafone spokesperson Rich Llewellyn said.