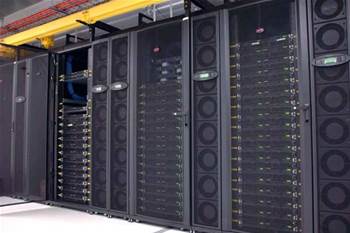 Graphics card vendor Nvidia has set its sights on enterprise IT with GPU-based ‘desktop supercomputers’ costing upwards of $3,000.

The demand for large-scale HPCs was currently driven by research organisations like the CSIRO, which deployed a cluster containing 64 Tesla S1070 chips (256 GPUs) in November 2009.

After being upgraded with newer Tesla s2050s, the cluster ranked 145 in the Top500 supercomputers list last November, performing the Linpack benchmark at 52.55 teraflops in double precision.

Luke Domanski of CSIRO’s Advanced Scientific Computing division viewed GPUs as the “next best step in multi-core computing”, and a vital learning opportunity for CSIRO scientists.

Unlike CPUs, which operated sequentially, GPU clusters performed operations in parallel, and thus required a different approach to programming.

Domanski was one of four specialists in a newly established Computational and Simulation Science team that trained and helped scientists develop on Nvidia’s CUDA architecture.

Besides the Canberra-based GPU cluster, CSIRO also had a number of what Domanski called “desktop supercomputers” – individual, four-GPU workstations.

Dragan Dimitrovici, managing director of Tesla integrator Xenon, said workstations with two to three Tesla GPUs would cost between $3,000 and $4,000.

Besides CSIRO, Xenon counted the Department of Defence, Rio Tinto and Chevron among its Australian customers.

In the US, Keane said consumer goods manufacturer Proctor & Gamble used GPU-based supercomputers to model how products would behave when dropped.

Automotive companies were also known to use HPCs for crash test simulations, resulting in significant savings from the elimination of unnecessary prototypes.

Three of the top five supercomputers currently employed hybrid designs, including: Tianhe, which combined about 7,000 Nvidia GPUs with 14,000 Intel CPUs; Nebulae at the Chinese National Supercomputing Centre; and TSUBAME 2.0 at the Tokyo Institute of Technology.

Besides requiring less energy to run, Keane expected advances in GPU performance to surpass that of CPUs, since developments were subsidised in part by the computer games industry’s demand for graphics processors.

In contrast, IBM’s Blue Gene technology was built specifically for HPC and “wouldn’t exist without assistance from the US government”, Keane claimed.

“We see a future in hybrid computing, where you have CPUs and GPUs working together,” he said.