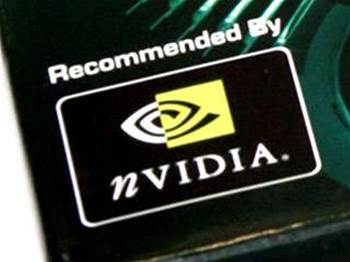 No specific figures are given in the presentation to back this claim up, but Nvidia spinner Benjamin Berraondo assured us “There is fact behind it.

"The five times faster claim is based on various game benchmarks that do run that much faster on our board compared to previous generation of both Intel and AMD integrated graphics."

He went on to say that when Nvidia compared its MP39 series to equivalent competitor products, the firm found “quite a few instances” where things sped up considerably compared to things currently happening in gaming.

Nvidia’s presentation is also keen to point out that nowadays it’s all about GPU+, Nvidia’s term for being able to do more than just graphics on a GPU, Cuda and PhysX, also boasting that the new chipsets offer a 70+ per cent boost with a Hybrid SLI and Purevideo "Blu-Ray that works".

One slide deals with benchmark performance, a touchy subject as some believe Nvidia, by using 3DMark Vantage which uses Ageia PhysX API (owned by Nvidia), is purposefully trying to skew results. But Nvidia is indignant at claims they are cheating by owning PhysX and using it when Intel can’t.

Aside from the fact that PhysX tests are PhysX tests and not GPU or CPU tests, Nvidia argues that it should not be penalised for using PhysX on cards. The way Nvidia looks at it, by offering PhysX, it is offering an innovation which will benefit gamers.

“If Havoc becomes truly CPU or GPU accelerated on either AMD or Intel's platform, I'm sure 3DMark Vantage wouldn't hesitate in placing a Havoc benchmark or a more integrated systems benchmark in as well," noted Berraondo.

Nvidia goes on to justify 3DMark Vantage as a fair benchmark with the fact that several games are now starting to appear with PhysX support. Mirror’s Edge from EA is one example. The firm is also eager to point out that there are plenty of Cuda apps in the pipeline, including FibreLink and Power DVD, as well as GPU accelerated apps like next week’s much anticipated Adobe CS4.

Nvidia’s next slide deals with the Nvidia’s claim that, for the first time on integrated graphics, games will be able to run top-selling games at 30 FPS and similar “playable frame rates”. We had previously pointed out that some of the 20+ FPS rates were at resolutions of 1024*768, and 800*600, which would make for a bit of an unsatisfactory gaming experience on games like Crysis, but as Berraondo points out, “real hardcore gamers probably won’t be trying to play Crysis on 800*600 resolution."

Nvidia never intended the 9300/9400 to be used by hardcore gamers. It was designed for general use and people who might play the odd game or two from that year’s “top 30 bestsellers list”. And, you know what, this is an integrated graphics chip you can actually game with to a fair degree. But, no arguments, for those who want an amazing gaming experience, integrated graphics aren’t really going to cut it.

The next slide takes another big dig at Intel, claiming "14 of Top 30 PC Games Fail on Intel Graphics Even on lowest resolution, lowest settings". This may have been true back in July – which is the month Nvidia admits it took its data from - but Intel claim that only seven per cent of games fail on its integrated graphics now, a significant improvement. Nvidia’s spinners claimed to not have more up-to-date information on the matter, but noted that failure was an issue, because for the user who does plan on playing the odd game, it should at least run properly.

Nvidia then spends several slides explaining why its only with its integrated graphics and advanced graphics features that users will be able to experience a game “the way it was meant to be played”.

Next up, and another slide which caused us a fair amount of indignant snorting is the slide which shows two $445 systems, identical except for the CPU and the motherboard. The 'Intel' system uses a G31 GPU and a Core 2 7200 CPU, whilst the Nvidia system uses a 9300 board and a Pentium DC E2180. Using three generation old Intel integrated Graphics and comparing it to a brand new Nvidia one didn’t seem exactly fair, so we asked the firm for its reasoning.

Nvidia replied that it was simply a case of coming up with two comparable price systems – both with exactly the same HDD, Memory, Optical, OS, and PSU, - leaving $170 per system for the board and CPU. Nvidia reckons it was trying to dispel standard wisdom that the faster the CPU, the faster the system, which is why the firm claims it picked a Core 2 Duo for $120 leaving $50 left to spend. This, according to Nvidia, made the G31 a “natural fit”. Hmmm… maybe. But despite this, we can’t help but mention that an ATI 3650 would probably more than have doubled performance.

Next slide, Nvidia notes the '16 core CUDA processor', which it says can deliver “enough horsepower to drive top DX9 and DX10 enthusiast games – at playable frame rates – with full support for hardware antialiasing and advanced filtering”. Of course, that will probably be more useful when more Cuda software starts tipping up. Currently Nvidia only counts Badaboom, folding@home, MotionDSP (which Nvidia partially owns), TMPGenc and TotalMedia Theater as demos for GPU acceleration, but swears more, including Picassa, are to follow.

The following slide deals with the fact that the New Hybrid PhysX feature purportedly turns the motherboard GPU into a dedicated PhysX processor, accelerating mainstream GPUs and showing comparisons between the 9400 GT and the Hybrid Physx with GeForce 9300.

Next Nvidia gets back to Hybrid SLI, something ATI has had down pat for a while now, but it looks as if Nvidia is making a big effort to catch up, claiming a 70+ per cent graphics performance boost when switching between 8400 GS or 8500 GT GPUs.

Finally, the last few slides deal with BluRay (“That works” – Joy!), which Nvidia sees as being really key. It’s a shame the firm didn’t think it was really key back when AMD got the 690 (with outstanding quality), or back in July when Intel bunged it into its integrated graphics too. Nvidia has come in a bit behind the crowd on this one, unfortunately.

That will be up to the punters to decide though.
Got a news tip for our journalists? Share it with us anonymously here.
theinquirer.net (c) 2010 Incisive Media
Tags:
9geforcehardwareintroducesmgpusnvidiaseries