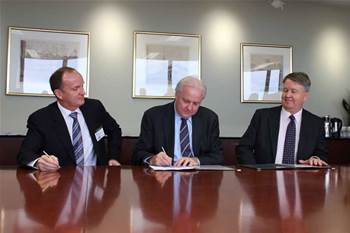 The NSW Government will have the right to reject prospective co-tenants of its two Metronode data centres, under an historic $182 million deal with the facility builder, inked today.

The deal was revealed last Tuesday but details, including its value and certain provisions were kept under wraps until the formal signing today.

Tender documents were initially released in November 2010. Discussions were led by NSW’s Department of Finance and Services (DFS).

“When we embarked on our journey to an ICT strategy … I don’t think people were quite so sure that we would end up where we have,” Finance Minister Greg Pearce said.

“This is a key part for us going forward with a whole-of-government approach to ICT.”

The Tier III facilities will accommodate a maximum of 2340 and 1950 racks respectively, each supporting up to 9MW of IT load at a power utilisation effectiveness of 1.2.

The NSW Departments of Health and Education will be anchor tenants of the new facilities, with other state government organisations expected to move by 2017.

The state government expected to save $230 million over the ten-year contract term and a total of $300 million over 15 years by consolidating 130 server rooms into the Metronode facilities.

The government expected to use a total of 8MW should all NSW agencies, state-owned enterprises and universities migrate to the new data centres.

Remaining capacity could be sold to federal agencies and private sector organisations, subject to the NSW Government’s approval.

“We think [Unanderra in NSW’s Illawarra region] is a good location to serve Federal Government agencies,” Roe said. “It’s a benefit for the state if we bring other users onto the site.

“There is a provision where we would notify the state and they would approve those co-tenants. But that would not be unreasonably withheld and it would be in their interests to bring them in.”

Brian McGlynn, who chaired the NSW Government’s Data Centre Project Control Group, said the government had intended to boost data centre investment in the state through the project.

“We don’t have any view at the moment of anyone we wouldn’t want to see in [the Metronode facilities], but you just never know who turns up one day,” he told iTnews.

“[The right to refuse co-tenants] is a fairly normal provision, remembering that these data centres have some delicate information in there, from health records to police records.

“But we don’t expect to ever be withholding [tenancy in the facilities].”

Metronode's commercial head Michael Juniper said it was in discussions with utilities and three universities to promote the new data centre facilities.

Neither the data centre builder nor government expected private sector use of the facility to be a security concern, because government equipment would be housed separately.

Roe explained that the facility was split into a number of discrete data halls, each offering about 200 racks and 760kW of cooling.

He said the department would survey agencies to determine their investment cycles and requirements, including demand for any managed services provided through a government private cloud.

The state government expected to establish a “better line of sight” into agencies’ migration plans by September.