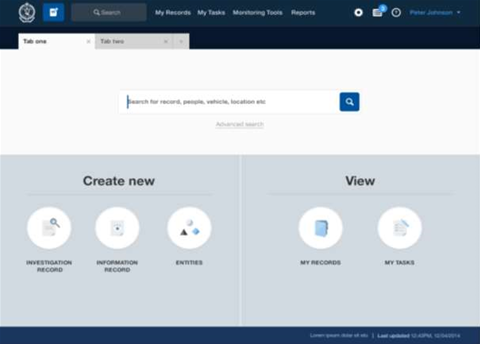 A mockup of the interface of NewCOPS. Source: NSW Police.

NSW Police has paused its overhaul of the state’s 24-year old core policing system while it considers its options for a new platform.

It made the decision following the delivery of the proof-of-concept solution for the future computerised operational police system (COPS), dubbed NewCOPS, last year.

COPS is the central database for the force’s everyday operations used for everything from the logging of criminal incidents to intelligence gathering and the pressing of charges.

But the legacy ADABAS/Natural/IBM solution - which consists of over 5000 green screens and relies on text-only data entry - is difficult to for officers to use to access real-time operational reports.

The law enforcement agency has been working to modernise COPS since 2013, after receiving an initial $44.8 million towards the build.

It went looking for a build partner in mid-2015 to replace COPS with a modern solution that offered faster and more efficient search capabilities, better navigation and data entry and support for mobile devices, among other things.

NSW Police had already appointed Deloitte to lead the first bundle of work in 2014, which produced "functional design on a logical level" for the new platform.

The proof-of-concept was to involve the replatforming of COPS’ events, intelligence, and investigation case management subsystems, before moving to other subsystems.

NSW Police has since merged the roles into a single chief information and technology officer, and hired former WaterNSW CITO Gordon Dunsford for the position.

The proof-of-concept comprised of two capabilities or use cases: a “a Co-ex/Integration PoC and a Data Driven Data Capture (D3C) PoC”, a spokesperson told iTnews.

The work also involved developing an “architecture to inform a possible replatforming roadmap for the modernisation of the current COPS ADABAS/Natural/IBM Solution”.

But after receiving the proof-of-concept force has now decided to pause the project to review its approach for NewCOPS.

“NSW Police are current (sic) reviewing its options to ensure a prudent and efficient replatforming of COPS as part of a wider transformation of technology being led by our new chief information and technology officer,” the spokesperson said.

However despite the agency calling for the proof-of-concept to involve the replatforming of COPS’ events, intelligence, and investigation case management subsystems, the spokesperson said this did not happen.

“To move from a targeted PoC of two specific functions of the existing COPS solutions (made of dozens of applications) to a full replatforming of all existing COPS functions is a very significant and complex program of work," the spokesperson said.

The force will wait on the outcome of the review before making a decision on what the NewCOPS technology solution will look like.

It had previously wanted to migrate from the legacy system to J2EE and HTML5 technology that would be either custom-built or leverage existing "police-specific solutions".

The program has already chewed through around $36 million of its revised budget of $49 million as of last month, according to budget documents.