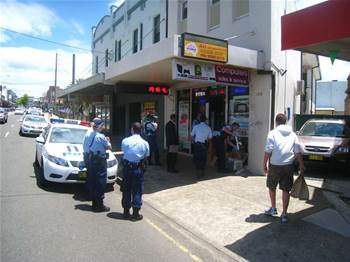 Police took one male into custody during the raid.

Private investigators representing TVB Group, one of the world’s largest providers of Asian language content, claim to have purchased a set-top box and pay TV service from a business registered as L&D LED Signs in Hurstville Sydney.

Broadcast from servers in China, the unlicensed service offers more than 1000 streaming television channels plus video-on-demand, including a trove of popular Asian language TV channels.

Popular US channels are also offered, including HBO, MTV, ESPN, The Discovery Channel, Fox and CNN. The service provides access to free-to-air programs such as The Family Guy and How I Met Your Mother and on-demand copies of movies including Hangover II, Mr Popper’s Penguins and Pirates of the Caribbean.

The set-top box was sold to Australians for $500 and the streaming service at $90 per month. It will be alleged that between subscription sales and advertising on the service, it generates in excess of $150 million a year.

It will be alleged that the Hurstville-based business and its occupants act as the Australian sales arm of the global pirate ring, which has in excess of 100,000 customers around the world.

A forensic analysis of the set-top box [see photo gallery above] found that it was a standard embedded PC system connecting to a peer-to-peer streaming service called Vatata, based in mainland China.

Michael Speck, former general manager of Music Industry Piracy Investigations described the raid as a “a fundamental departure from what other content owners have done” in Australia to tackle piracy.

Previously, content owners had assumed that there was “no way to prosecute peer-to-peer pirates”, but shutting down regional sales offices which sell the set-top boxes and manage subscriptions would provide significant deterrents, he said.