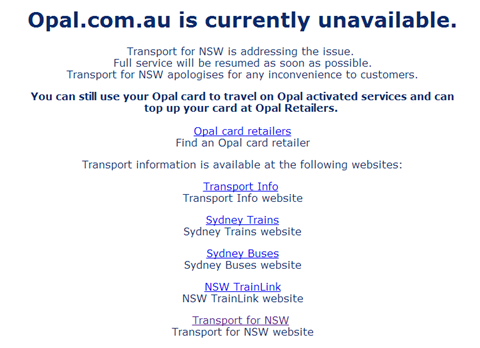 A several-hour long system crash yesterday and continuing website connectivity issues today have locked users of the NSW Opal card out of their accounts and inaccurately calculated some travellers' fare charges.

The Opal website has been suffering intermittent issues since early yesterday, going completely offline at regular intervals and lacking full functionality when back up.

"The server is temporarily unable to service your request due to maintenance downtime or capacity problems."

Users have complained of being locked out of their accounts, being unable to order new cards, and of not having their top-up payments accepted.

The glitch does not appear to be affecting Opal terminals themselves, however, which are continuing to charge travellers the appropriate fares.

As a result of yesterday's system crash, the travel activity of some users' accounts has failed to update to reflect journeys made after the glitch - meaning some travellers are continuing to be charged for journeys that would normally fall under Transport's offer of free trips after every eight journeys in week.

A department spokesperson confirmed the system issues and said Opal customers who had been unable to top up their card could do so via the 13OPAL phone number or at Opal retailers.

"The majority of Opal customers set their card to auto top-up, so they don’t need to worry about logging onto the website to add value to their card," the spokesperson said.

"Transport for NSW apologises to customers for any inconvenience caused by intermittent access to the Opal website in the last two days."

The department did not detail what caused the issue nor when it expected the glitch to be fixed.

The Opal card is being rolled out progressively across the state's train, ferry and bus networks to enable Transport to address any issues with the system.

The underlying electronic ticketing system has been provided by Cubic Transportation Systems. The project is expected to be completed in December this year.